When one is from Florida, one has to deal with tourists to at least a certain extent. Yes, I know that tourists go many places...hell, when we lived in Charleston, SC, we had to put up with a ton of them...but Florida basically depends on them for its livelihood.

This overreliance on outsiders (whom the natives invariably resent) is a major cause to the unique Florida character, a major reason why Florida (and Floridians) do things a little differently...and are themselves a little different.

Some areas of difference? Some are nice and sweet...the Florida Welcome Center on I-95, for instance, gives out free samples of orange or grapefruit juice...sweet literally. Some are slightly incongruous...every city in Florida (at least among the coastal/tourist areas) plants palm trees everywhere they can...although the trees are native to very few of the places that grow them. Then, as everyone knows, Florida can get seriously weird...

Case in point: My parents accompanied the wonderful wife and I on a trip down to St. Augustine. For those of you not familiar, St. Augustine is the oldest city in the US, and it is one of the places made famous because Ponce de Leon supposedly thought it contained an actual fountain of youth. They also have a Ripley's Believe It Or Not museum. My wife wanted to see a bit of Florida, so we went for a visit.

The whole way down, however, I kept seeing billboards for a place which billed itself as "The Florida Visitor's Center." They had tons of black billboards with either orange or fluorescent yellow writing advertising alternatively "Indian River Citrus," hundreds of tourist shirts, free orange juice, and the like. The clincher for me is that I saw one advertising a "13 foot alligator." Naturally, I wanted to go see this. Of course, my loving parents refused to believe I was serious and drove straight past the place as I pouted in the back seat.

So we went to St. Augustine, which is actaully pretty nice in spite of being touristy. The secret is that St. Augustine has never been invaded by the major corporations. There are no mouse ears, there are no superhero rides, and none of the restaurants are owned by b-movie stars. It's more kitch than commercial, which is nice. But you can still see historic stuff and get a sense that you are actually in Florida instead of some generic theme park. We wandered around the tourist streets, stared at the river, bought some 2/$5 teeshirts, and trooped around the fort. 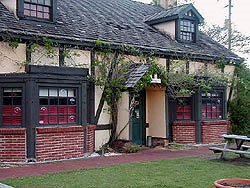 On the way back, we stopped at the King's Head British Pub, which is just a nice recreation of an authentic pub run by an authentic Englishwoman. As my Mom's from England, she always feels at home here, and I like it for the good beer selection (I had a Fullers ESB) and good British food...their stilton onion soup is excellent, as is their fish and chips. This place is cool because even though it's just out of a tourist destination, it's not touristy at all...it's just a cool local hangout.

After dinner, we drove back to Jacksonville. I managed, however, to convince the parental units to detour to the Florida Visitor's Center for which I saw so many billboards on the trip down...I think the beer and food helped in that regard. But I'd seen enough serious tourism...I wanted my cheese.

The center was, in a word, fantastic...everything I hoped it would be. In terms of layout, it was essentially a gas station with an extended grocery area filled with all the merchandise you could imagine. They had tons of cheap teeshirts (I got one that had a picture of an alligator and the words "Bite Me...Florida"), tons of silly gator and flamingo knicknacks, gator jerky, key lime candy (in the shape of alligators), and every other bit of cheap crap you could imagine. 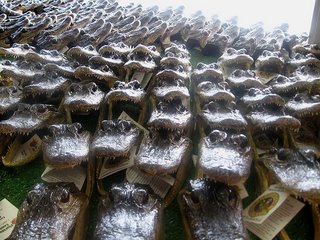 They did in fact still have the 13 foot alligator, which was nice. It was stuffed, not live, which was a little bit of a bummer. It was, however, surrounded by hundreds of stuffed gator heads, which made it look like some weird Aztec monument gone seriously awry...which of course made me love it all the more. So we got our cheap, kitch tourist stuff and went home...and I was fully content.

The highlight of the trip was getting a balance of all the tourist styles save the plastic megacorp variety. Let's face it...none of the touristy things that people experience in Florida have any real relationship to the state. It's not really a princess-stuffed land of illusion. Neither, however, is it a historical paradise. And actual Floridians never actually eat gator jerky or drink out of a mug made of shells...unless they're deliberately being stupid, like me.

Tourism is always a game, a ruse. Tourist areas want people to come there, gain some overly romantic or excitement-filled notion of the surroundings which will ensure return visits, spend a whole lot of cash, and then go the hell away. So reality doesn't enter into it at all...but this is obvious to anyone who's either lived in a tourist area or been a tourist themselves.

The reason that tourism holds a certain amount of charm is the varieties of games played, the different narratives of place sold, the subtle line between "we need you" and "get the hell out" on which every tourist-scavanger dances.

I've always preferred the kitchy variety because in many ways, it's the most subtle. "Yes, you may think these shell lamps are junky and goofy...you're right, they are...and you may think that I'm a hick for making and selling them...but you're gonna buy them, and I'm taking money off your idiotic ass in the process...so who's the hick here?" You know every purveyor of junky stuff is thinking this.

Tourism as warfare...it's definitely a topic worthy of further thought...

Posted by themikedubose at 3:20 PM

okay seriously, that picture of alligator genocide made me tear-up :(