I was driving into work today, listening to a cd of mp3s on random play. It started out with Black Sabbath, a band that's very important to me. If anyone ever asks me how I learned how to play guitar, I could just hand them a copy of Paraniod...it's as good of an answer as any.

After I stopped to vote and get gas, The Daileys' "Toast the Town" came on (at least I think that's the title). The Daileys were friends of mine who played around Jacksonville. They never released anything, but as the singer was one of my best friends, I got a number of demos and live tracks...and I love them almost as much as Black Sabbath, although in a very different way. You see, with The Daileys, I experienced the band much differently. I got to hang out with them, ride to shows with them, drink with them, help them set up and tear down...and these are experiences I could never have with bands like Black Sabbath.

I've often thought about my move away from being a heavy metal guy. If anyone knew me in high school, they'd know I had the heavy metal hair (including a brief stint with the Bon Jovi perm), listened to metal pretty much exclusively, dressed in the metal uniform of jeans and concert shirt, and I even owned some spiked wristbands.

Since this time, I've broadened my tastes significantly. The first big non-metal band for me was Living Colour, who took metal and expanded the playing ground significantly with hip-hop and funk, among others. Then came my huge Frank Zappa phase, which taught me that boundaries are not at all necessary. The next big one was Son Volt, who taught me that country and rock could and should go hand in hand. The last big one was the now unfortunately defunct Slobberbone, who taught me that rock could be vital again, and it could be something with which I could still connect.

My move away from metal wasn't just a matter of being bored with the music. Metal is at times seemingly impervious to change (see this article on 80s metal acts on tour for a demonstration), but I still need the crash of guitars, so I often put up with the stagnation. The most important factor for me, though, is I quit being able to relate or even stand the "star/performer" aspect. Jeff Tweedy wrote that "every star that hides on the back of the bus is just waiting for his cover to be blown," and I started to suspect the same thing...and I think I increasingly needed a greater connection with the bands.

A good number of the bands I now listen to and go to see are those to whom I can relate. They may have day jobs. They're probably going to be loading in their own equipment. They'll be riding in a van, not a bus. You probably can approach them at the show and talk to them over a beer.

Case in point: a while back, I got an e-mail from The Drams' mailing list asking for volunteers to work merchandise for some shows on their tour with the Drive-By Truckers...and since they were playing Detroit, and since both bands are among my current favorites, I volunteered. They chose me, so on October 20th, me and a good friend made the trip.

I was told to find "Keith," who would help me get the merchandise set up...when I made it over to the table, I found out it was the bass player for the band. He was a little "rock and roll" but still a very nice guy. After their set, he came over, looked at the merchandise sales figures, and hugged me. Jess, their guitar player, came over, introduced himself, and snagged a cd for his parents. Tony (the drummer) and Chad (the keyboard player) both came over, introduced themselves, shook my hand, and thanked me for helping them out...and at the end of the night, I talked to Brent (the singer/guitar player) for a few minutes. I felt a little like a VIP, but it was cool just being able to help. I think The Drams are one of the best bands out there, and I just want them to keep playing and putting out albums...and I'll do whatever I can to help. 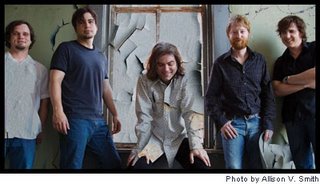 I was thinking about this, because I am also a very big Drive-By Truckers fan, and I was also excited to see them play. I've seen DBT play twice before in Detroit, but it was at a smaller club...this time, they were in a theater. And by watching them, it was clear that they've made some kind of hurdle, because all I kept thinking was "they sure aren't a club band anymore." Maybe it was that they had stage props and professional lighting, or maybe they'd just gotten better, but they seemed made for playing big rooms. They projected themselves well, and the set was rollicking, explosive, and, as any good rock show should be, just a little transcendent.

I did not, however, have the opportunity to meet them. They now have a full road crew, up to their own merchandise guy. They have a bus, not a van. They are, in short, professionals...and they never came out from backstage. The thing is, I love that band, and their performance was amazing. And they've worked very hard and deserve every bit of success that's in their grasp.

I don't, however, have the same connection with them that I had with The Drams. I'm a fan of DBT, but I'm rooting for The Drams...and in some small way, I feel like I'm a part of them. I truly want The Drams to be huge, but I know that if they ever do achieve fame, it will take them further away from me.

Maybe this conundrum is just another sign (like I need another...) that I'm getting old. I love my art as much as ever, but since I no longer fit into a mass of fans (back in high school, I hung around a whole lot of metal kids), I look for those connections with the artists themselves. Maybe I'm just more political and would rather give my money to a cool group of guys like Grand Champeen who actually need my money than to Foo Fighters, who could buy and sell me many times over...but maybe helping out the little guys is just another way for me to connect.

Music, like art, is often about connections...and although the show made me fear that I might be losing another band to the big time, I did, after all, get to go see the show with a good friend, and we did share some new experiences, and maybe we became a bit better friends because of it. And I guess I can let my favorite bands become bigger and maybe more distant if I can then share my love for this music with friends, thus helping strengthen that connection...after all, it's the connections that are really important.

Posted by themikedubose at 5:12 PM

looks like the Drams are a spin-off of Slobberbone, right?

Jess, Brent and Tony all played with Slobberbone.

you have any inside info???