3. Drive-By Truckers - A Blessing and a Curse 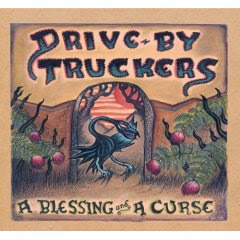 Since Decoration Day, the Drive-By Truckers have been in my list of bands that could be the best rock band in America. Their last album, The Dirty South, featured crushing rockers by guitarist Mike Cooley and a selection of wide-ranging masterpieces from newer guitarist Jason Isabell. The contributions from Patterson Hood, the main singer, were, however, slightly uneven. For each epic rocker like "Lookout Mountain," there were weaker tracks which sounded forced, like "The Boys from Alabama." Overall, however, there were enough brilliant moments on the disk to still make it a top rock album. one had to wonder, however, if Patterson's talent was beginning to fade.

Then came A Blessing and a Curse...and if this album makes nothing else clear, it is obvious that Patterson Hood is hitting on all cylinders. "Aftermath USA" is just as raucous as ever, while "Goodbye" is as bittersweet as possible. Mike Cooley's songs have also hit a new level of depth, especially the shimmering "Space City." Isabell's songs don't stand out as much, but that might just be because everything else on here is so damn strong.

Overall, the album has the feel of The Replacements slammed together with The Faces. Less political than their previous work, but that might help them better get that mass audience that they so deserve. If you've never heard DBT, they've got a great catalog, and you should dive in immediately. Also, look for solo albums from both Isabell and Hood. 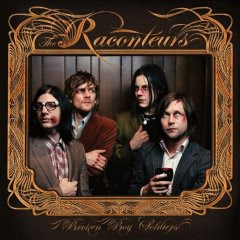 I've been a big White Stripes fan for a while, and I'm proud to say that I got into them before the bandwagon really started rolling (right after White Blood Cells, actually). When I found out that White Stripes singer Jack White was putting out a side project, I was filled with a little bit of trepidation. Could he collaborate, or would be be
a control freak? Could he find collaborators who could match up to him? Since he's pretty much the brains behind The White Stripes, what's the point? If the side project was in fact substantially different, would it tame White's rebellious, non-mainstream side (which, after all, is the point of his full-time band)?

Luckily, White found a brilliant collaborator in Brendan Benson, a polished indy pop-rock guru also out of Detroit, and the two of them work together very well. The result, when it works the best (such as in the Benson tune "Together," which has some brilliant, gorgeous Jack White background vocals; ditto with the bluesy "Level"), is a nuanced blend of raw power and experimental polish. This is rocky, loose blues rock with an experimental, non-cliched pop feel that doesn't really sound like anything else out there.

Now I have to really start a Brendan Benson obsession to balance out my White Stripes fandom.

Can I also say that The Raconteurs have the coolest band web site ever?

Posted by themikedubose at 1:51 PM