2. The Hold Steady - Boys and Girls in America 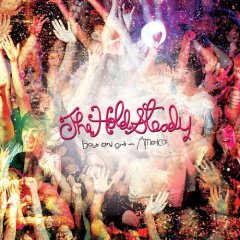 It's always nice to find out that there is still someone putting out music who, rather than looking for polish and maximum sales ability, would rather put out a great, steaming slab of rawk...and that's why I've fallen in love with The Hold Steady.

(for those not in the know, rawk (as opposed to rock) is distinguished by its utter need for the edge, for the necessity of straddling the line between control and collapse...if you are talking about music where the thrill for the listener is determining not if but when the band will implode, you are verging on rawk territory)

The Hold Steady's music is, quite simply, fun. Every riff makes me want to sell all my posessions save my Telecaster, Les Paul, and Marshall; move to Detroit; and start a band. Every lyric makes me want to flee all responsibility and fall into a life of debauchery, excess, and decline...if, for no other reason, so I can get stories that are half as good as these. Every time I play this disk, I want to follow the band around like some ersatz contemporary version of a deadhead, but since these guys are so obviously a bar band (nay, a magnificent bar band), I'm not sure my liver would hold up.

At first, I had a little difficulty getting past the vocal delivery on this disk. The singer's voice reminds me in timbre of Bruce Springsteen, and that's not really a good thing. But there is an undeniable energy, and part of me will always love albums where all the songs are about getting drunk or high. And this album is clearly not subtle; "Chips Ahoy!," for instance, is about the singer hooking up with a girl who can pick winning race horses...and their response to a win? "He came in six lengths ahead, we spent the whole next week getting high." Again, from "Stuck Between Stations," about a dream girl: "she was a really cool kisser and she wasn't all that strict of a Christian." Again, from "Chill-Out Tent," about two people who meet after OD'ing at a concert: "they started kissing when the nurses took off their IVs; it was kind of sexy but it was kind of creepy."

As I said, good, simple, obscene rawk. Me and the spousal unit were listening to this on the way to a wedding, and I made a crack about how this band was awesome, but they would be dangerous if they ever outgrew the "party/stoner" schtick. Then the song "You can make him like you" came on, and I started really listening to the lyrics...and I came across this one:

...and that's where it hit me...The Hold Steady had been playing me all along. They have all this rock...excuse me, rawk...ability AND they can do deep, subtle lyrics? I thought, in the words of Agent K, that I had "a pretty good bead on things," but this one lyric is making me do a re-think. Once again, I need to reevaluate everything I think about music, art, and life.

But isn't that what great art is supposed to do?

Posted by themikedubose at 11:31 AM