Way back when, I used to be a wild, unadulterated metalhead. I had the requisite long hair, which marked one as a metalhead, and also as a rebel/freak/dangerous person. 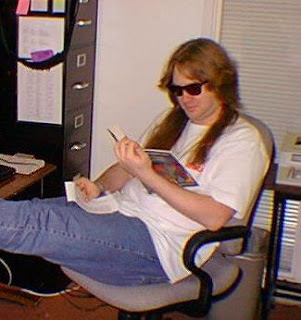 (To be fair, I also had the spiked wristbands, the fingerless leather gloves, and oodles of concert shirts, all of which also similarly marked me...but that's another blog post)

Having long hair, for a time, seemed to make one an acceptable target for prejudice and discrimination, especially among those old-line southerners. The police, for one, really loved me. I got thrown out of a McDonalds. I had my car searched. I was frisked at least once. From the non-police side, I also was refused service in a few restaurants and bars, was stared at repeatedly, and so forth.

Part of the fun of having the hair was entirely, I admit, in this shock value. It was always interesting to see how angry some people could get over a simple fashion choice. However, the further we went from the eighties, the harder it became to really provoke a reaction with the hair. Before I went to college, I was working as a temp in a business that required formal wear. More than one of the suits had long pony tails. This was a sign that long hair had gone from political statement, past avant garde fashion, and had become mere yuppie wear.

If it wasn't going to shock, what, I eventually had to ask, was the point of long hair? For those of you who've never had long hair, there are plenty of drawbacks.

What are the advantages? More than once, I had some hot blonde want to discuss hair care or offer to crimp my hair (hey, it was the eighties)...but if a woman is really interested in your conditioner, I seriously doubt they're looking at you as an object of lust. At the very least, it never happened to me.

All these things and more were on my mind when I got my hair chopped. The long hair had quit doing what I wanted. Instead, it merely became a social marker, signaling me only as a member of a particular group...and, especially as I was getting ready to move across the country and restart my life, I had no real desire to have any concrete social marker at this point of my life...so the hair went.

The initial big haircut was done at an honest-to-god real hair salon that a friend worked at, during my lunch break. What made this whole process interesting is that I told utterly no one that I was getting two feet of hair removed. Afterward, when I showed back up to work, everyone to a person let out an "Oh My God!!!"...except one professor (with whom I was working) who didn't even seem to notice. When I went home that night, my parents took a full minute to recognize me. When I went to a bar that night, a friend of mine took five mintues to recognize me. The shock of it all was pretty cool...it felt liberating to be removed from all the associations of long hair.

When I got up to BG, I had no idea where to get my hair done, so I went to one of those "Hair Cuttery" mall-esque places. This was never a good idea. When no one working in a hair place has good hair, that should be a sign to go elsewhere. The only plus was that they took off way too much, so I only had to go every six months. The down side was that I often looked like a weed wacker attack victim. Plus, the hair stylists wouldn't shut up, so I was always forced to have some ridiculously inane conversation about the weather or American Idol or something. Also, they usually played Top 40 Country radio, which gave me moderate indigestion.

I then went to one of the local barber shops, and my hair started immediately looking better. The only real problem was that the bartender insisted on talking politics. This is never good. He was a leftie, which can itself good. However, he's a little to the left of V.I. Lenin, which is just unsettling. He also gets worked up easily, and when he's ranting, he gets really wild, redfaced, and loud. At the best, the quality of the haircuts decline when he's telling me with extreme emphasis how Bush and a cabal of masonic businessmen are going to declare martial law, all the while gesticulating with pointy scissors that come dangerously close to plunging into my cerebellum.

I went to a new barber shop today. My hair looks good. The barbers didn't talk to me at all during the hair cut. They had good magazines to read. I didn't have to worry about being socially marked as anything.

Hey, is it a sign of being an adult/old man that you go to a barber shop? If so, that is one social marking I never expected...

Posted by themikedubose at 4:48 PM

Anonymous said...
This comment has been removed by a blog administrator.
11:06 PM