the album of the century 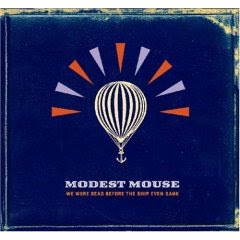 I have been granted early access to the new Modest Mouse album We Were Dead Before the Ship Even Sank. I can't quit playing this...the only way I listen to anything else is when the spousal unit snags the cd. And then I have to fight to get it back.

Modest Mouse shows depth they never had before. It's as heavy as Good News for People Who Love Bad News in parts, funky in others. They can manipulate more emotions than ever, as evident in the haunting "Little Motel." Every track is just damn cool.

It officially comes out next Tuesday. Go get you some musical goodness.

Posted by themikedubose at 7:01 PM