What I did over my Spring Break

I am an academic. This means many things, but one of the main things that come out of this definition of identity is that my schedule has built-in vacations. Well, they’re not really vacations in the traditional sense...while I might not be working my standard teaching position, I instead have to make up all the scholarly stuff I don’t have time to do during the normal semester.

It’s been this way for me ever since I started the academic game as a lowly student. The only difference then was that instead of just catching up on papers and such, I also upped my hours at whatever part-time jobs I was working so that I could continue to afford to go to school.

There are a few exceptions to all this…I go see my parents every few years over summer break. I tend to drink slightly more over the mini-vacations…not surprisingly, when academics don’t have to teach the next day, thoughts tend to wander over to the gross hedonism which their normal schedules do not allow (and in fact work directly against).

About the only true time that I ever get to “get out of Dodge” is when I have a conference to attend. This is as close as most academics ever really get to pleasure travel, and it’s definitely a working holiday, because one has to present and, if the attendee of a conference is lucky enough to actually find relevant panels to attend, listen to other scholars. Sadly enough, I don’t get to do much of the latter…I have the misfortune to not be doing sexy academic work, plus I have a low threshold for the boredom one normally gets from the standard presentation…believe it or not, most academics are not, as is Mel Brooks, stand-up philosophers.

About all the notable travel I’ve done in years (with the exception of last summer’s Minneapolis trip) has been for conferences. My trip to Europe? A conference in Spain. A trip to see my old roommate in Wisconsin? A Milwaukee conference. Visiting the nation’s capital? The CSA annual meeting. Going to Canada? A conference in Toronto. My honeymoon? A conference in New Orleans.

This spring break, I went (with the Spousal Unit tagging along) went to the Northeast Modern Language Association conference in Baltimore, MD. Yes, it was a regional, but I’m trying to market myself as an English guy, so the MLA side was important. I had no special attraction to Baltimore, but the panel seemed good, so we went, leaving on March 1.

The first thing I learned was that you should always double-check online directions. The ones I got (courtesy of the hotel-booking site) had me taking I-80 to I-70. Eventually, I figured out that the two interstates never actually meet. Unfortunately, I only found this out after going significantly (2 2/1 hours) out of our way. I found a detour back to the proper road, but that detour took us through several Pennsylvania towns that used to be mining towns…now they were just centers of crushing poverty. We didn’t get to the hotel until after 9, by which time Baltimore’s beer stores had closed. Damn blue laws…they added to one hell of a birthday.

The next day, Friday, was designated as “explore the city” day. We drove the five miles from our hotel to the conference hotel (my University doesn’t offer any travel support, so I stay wherever is cheapest) through a part of town which, like we saw in Pennsylvania, had crushing poverty…only it was urban poverty, not rural. We registered at the conference okay, and then we went to our single panel for the day.

The panel was on Physics and Literary theory, which is certainly an intriguing combination. Unfortunately, two out of the three presenters cancelled…as well as the organizer/chair. This was fine by me, however, as the one presenter that was left (doing postcolonialism and dark matter) was the one I wanted to see anyway. She did a great job…I learned some new approaches. 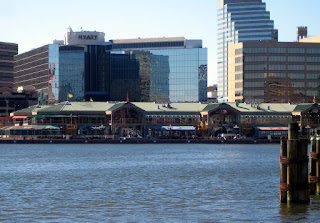 Afterward, the wife and I walked the 8 blocks or so to Baltimore’s Inner Harbor, which is kind of an attempt to create a franchised tourist mall, complete with tourist restaurants and gift shops. We snacked lightly at the food court, where my darling wife had her first raw oyster. She seemed to like it, although she wanted to throw on way too much toppings. 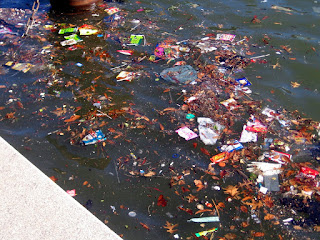 We ambled around the waterway for a while. I’m torn…I like waterfront views, but in most major cities, the waterfront only really reminds you of the true extent of pollution. The harbor was no different…there were several artificial inlets which collect trash. We were following these two native Baltimore women over a bridge spanning one of these, and I heard one say that she’d once seen a severed deer head floating in the water. 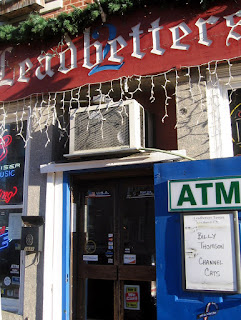 After wandering the harbor area and looking at a lot of touristy crap and dining at a very mediocre tapas place, we decided to walk over to the Fell’s Point region…several people on Postcard recommended we hit some bars there. It was quite a walk, though, especially since my wife was, for some reason, not wearing sneakers. When we got there, we found Leadbetters, Baltimore’s best dive bar (voted so several years in a row), and went in so the wife could rest, and I could drink. It was a classic place, and I enjoyed my $2 pints of Yuengling.

We then hit a cool record store, hit another restaurant for oysters and crab, and wandered back to the Harbor, where the spousal unit bought me a tourist tee-shirt. We then stumbled back to the car. Unfortunately, as we had been walking for hour and hours, our feet were hurting…and the wife started to really slow down just as we hit a very poor, very rough spot before our parking garage. But we didn’t get mugged or anything.

I presented my paper on heroes in the show House on Saturday. My presentation went well, and I got a lot of questions (which normally doesn’t happen…usually, I get ignored until time runs out). Afterward, the panel chair asked me if I would be interested in contributing my essay to a collection she was editing. Networking is a beautiful thing.

I went downstairs to find a bathroom and change…I was wearing a suit (not something I’d normally do, but English people are rather formal). However, the hotel was also having an early “St. Patrick’s Day Irishman’s Business Luncheon,” and the lobby was flooded with drunk middle age businessmen in green blazers and green ties, and they were all blasted out of their mind…at 11:30 in the morning. I swear, if someone would’ve started a fight, it would’ve been the summation of many bad stereotypes. I had to fight my way through these drunken men to get to the restroom to change, but it was worth it for one comment I overheard while struggling out of my suit: one businessman in the bathroom said to another “Let me shake your hand before you whip out your politician.”

The wife and I went to lunch at the Lexington Market (a kind of international grocer market center) with one of my colleagues. The Lexington Market was very cool…apart from the grocer booths (one filled with shockingly fresh seafood on ice, one with piles of butchered animals, and so forth), they had a bunch of individual food stalls. I ended up with some fried chicken from a soul food booth and a Malay stir-fry.

We went back to the conference so I could see a panel on depictions of space and the cityscape, or something like that. It sounded very interesting, but it was three people directly reading their long papers in quiet, monotone voices. My poor wife had to fight drowsiness, and I demanded we stop at the hotel bar afterward and drink. We then went to a “how to get a job” panel which taught me absolutely nothing I didn’t figure out on my first month on the market. It did, however, provide a forum for some NJ professor/geezer to tell us several times that it wasn’t too late to look for a non-academic job; I swear, for a minute, I thought he was about to tell us that there was no shame in flipping burgers. 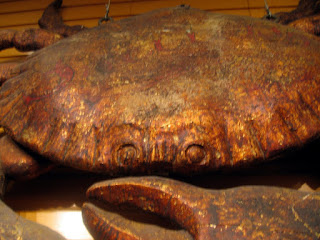 Afterward, we went (with our lunch colleague) to a famous crab restaurant in the Inner Harbor. There was a tremendously long wait for some skimpy servings of overpriced food that was not as good as the food court meal we got the day before. We then looked at more crab-related touristy stuff before heading back to the hotel…we needed sleep for the next day’s drive back home.

So what did I do the rest of my break? Well, on Monday, I went with some friends to Howards and drank. Tuesday, more drinking at Howards. On Wednesday, I went with a friend to the Kildare House outside of Windsor, Canada, so he could watch a Scottish soccer game and talk to the very cool Scot expatriates…then back to his place for drinking. I also drank on Thursday (can’t remember where), and on Friday, another friend came in from out of town, so (wait for it) we drank at Howards until he left, then I went to a friend’s house for a wine party. I detoxed the rest of the time, because I’m too damn old to continue to drink like a frat boy.

Since then, I’ve wisely cut back my drinking. Unfortunately, I’ve also had to cut out my crab and oyster intake…but one does what one has to, I guess…
Posted by themikedubose at 12:13 PM