While I love heavy music, I've never been a fan of bands where people just shout or scream. It never seemed a positive step to me to abandon melody...in fact, it just seems to make the music more juvenile-sounding and amaturish. This is one of the reasons why I missed the boat on a lot of punk rock.

I know, for instance, that Black Flag was a tremendously influential band, and I realize that I should be a lot more cognizant of their impact. However, I tend to just not like them that much. The same can go for their former singer Henry Rollins' solo work, which to me sounds like a lot of yelling.

Hey, there's nothing wrong per se with yelling...I do it all the time. However, I never charge anyone to hear me screaming. Mike yells are definitively open source.

So although I don't like his albums, I am, however, a fan of Henry Rollins as a spoken work performer. I've seen him a few times and enjoyed it tremendously. I own a pretty cool cd compilation of his spoken word performances. I also have an anthology of his writing that I like (even if it is a little "over the top" at times).

When I found out that IFC gave him a show, I was happy. I managed to get my lovely spousal unit to watch, and now we are both regular viewers.

When the debut episode of The Henry Rollins Show season 2 came out the friday before last, we were tuned in. The guest was Marilyn Manson, and I said to the lovely wife, "this could be a trainwreck." I had no special feelings toward Manson, but he always struck me as a "button-pusher," merely out to be as creepy and controversial as possible, only for the sake of staying in the public's eye.

Boy, was I wrong. He was fascinating, intelligent, charming, and reflective. Both the spouse and I were riveted, and I even felt inclined to delve into his music. 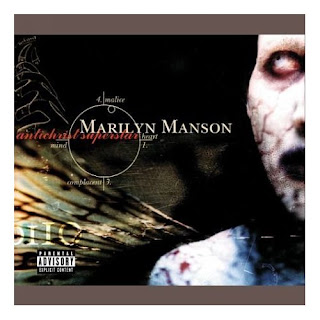 That's how I found myself listening to Antichrist Superstar on the way to work. That's why I find "Beautiful People" stuck in my head. That's why I realize that if I were into this band ten years ago, it might've helped me connect with my students.

If I were to mention it to them now, however, they'd only say something like "that is so 2001." Bastards.
Posted by themikedubose at 11:20 AM

Alas, Antichrist was the last record that really seemed to be worth an hour's attention. I personally enjoy "Lunchbox" from Portrait of an American Family.

On the bright side, being 10 years behind the curve is phenomenal for shopping in the cheap used cd bins. Welcome to the wonderful world of $2.50 bliss.

Anonymous said...
This comment has been removed by a blog administrator.
11:12 PM