the endless summer has ended

On our trips to Florida, I've taken my lovely wife to many of the hot spots, a number of the places I used to hang out, and a decent percentage of the cheesy tourist attractions. Every vacation, I try to make clear just what this particular chunk of Florida means to me, and why my Florida isn't like the Florida that everyone thinks about when they think of Florida...if you can follow that at all.

But damnit, they keep changing my Florida.

When you're in Florida, one of the things that everyone immediately latches onto is the beach. Well, until I got tired of my amazingly frequent and swift sunburns (and subsequent bouts of sun poisoning), I too used to spend some time on lounge chairs looking at the waves. Of course, I also brought either a few 2 liters of Jolt Cola (chug a few of these, and the resulting caffiene buzz makes five hours on the beach seem like five minutes), plenty of cigarettes, and often some cheap beer wrapped in one of those can wrappers that turned it into a "Pipsi" or a "Dr. Pipper." Mind-altering substances somehow help you get more in zen mode with the waves

Even after I got tired of the par-broiling and subsequent pain, I'd still head out on the hour-long trip to Jax Beach. They had the city's only heavy metal bar. They had one beach-side place that must've been happening, because it always smelled like vomit. They had hoardes of rampaging teens cruising down 1st Street at night and a small brigade of laughingly ineffectual bicycle police trying to "run the punks away." Of course, if you actually tried to go on the beach itself during the night, the cops swarmed onto you and would escort you either back to the street or, in a more draconian move, towards their jail...one would guess the officers were taking out some vengeance for people laughing at their speedo bike shorts.

You see, Jax Beach always had a mild identity crisis. They wanted to be a tourist resort. They only wanted families, preferably rich ones, to come, stay in resort hotels, spend lots of money. They wanted to be Daytona without the sin, the fun, or the Girls Gone Wild party bus.

Unfortunately for them, Jax Beach did not attract those kind of people. Instead, it was definitively working class, as much of Jacksonville was. It was blue collar parents letting their kids run amuck. It was construction workers trying to forget their work week by watching bikini-clad babes slar mysterious substances into their skin. It was teenagers trying to forget the mind-crushing boredom of their overcrowded school by diving into the crashing waves...which I'm told are big by east coast standards.

If I were to boil my memories of Jax Beach down to one scene, it would be laying on a towel on the beach in front of the heavy metal bar, smoking a cigarette and drinking a "Dr. Pipsi," half listening to the bar band play Van Halen...all the while trying to figure out how I'm going to get out of work next weekend for a concert.

This was not a tourist beach. It was a working class beach. 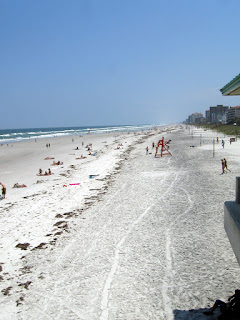 This Florida trip, me and the spousal unit finally went back to Jax Beach. It was my first trip in over eight years. None of the bars I remember still stand. There are, as far as I could tell, no places I could stagger up through the sand to a bar deck and grab a long neck. Instead, there's high rise condominium after condominium. There's a beach walk/pavillion built by the same evil bastards who did Baltimore's Inner Harbor. It's safe, clean, free of rowdy teens.

It was bland, sterile, safe, completely unremarkable. It could be AnyBeach, Florida. They've taken my working class beach and made it a theme park.

Coming from Jacksonville, I've always had to tell Northerners that all of Florida is not Disney. Unfortunately, every time I go back, a little bit of Jax has been turned into Disney. It's sad that my former home so much feels the need to live up to outsider expectations as to what it should be.
Posted by themikedubose at 9:55 AM