food television and the quote of the week

One of my old roomates came into town this weekend. We were watching Food Network for some reason, and we had a great conversation deconstructing how the network uses concepts from pornography in their programming.

Specifically, when you watch one of their cooking shows (as opposed to their annoying reality or travel programming), they have a lot of shots focusing on melting cheese, gooey deserts, or luscious sauces. This is the standard "let's get them drooling" approach which is also employed in food magazines and ads. 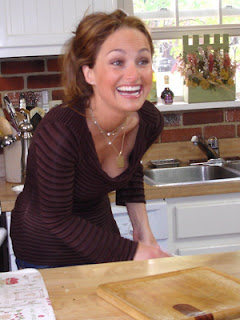 Anyway, Giada was doing the aforementioned great looking pasta dish, and she added some chopped herb to the skillet. The resulting conversation went like this:

former roomie, sounding unnaturally alarmed: "What was that?"

roomie: "Oh, thank God. I thought she was adding cilantro."

me: "Are you a cilantro hater?"

roomie: "I have two rules about food. I wouldn't eat human flesh unless I was pretty certain it was procured in an ethical way...and I don't like cilantro."

Posted by themikedubose at 11:29 AM