on being a gentleman loser

Alternative Country musician Robbie Fulks once said that once you hit a certain age, country music is sitting there waiting on you. While I don't know about that (I'm a bit more open to country than I ever was, but I still like very little), I have found myself drifting more towards Steely Dan than I ever had.

When I was younger, I had grandiose notions of eventually becoming a rock star...and that was mixed in with a lot of loner hero imagery, which I suppose is pretty typical for a lot of angst-ridden, painfully shy teens. That mostly died in me bit by bit as a result of failed band attempts, failure to even get jam sessions with friends, and seeing the bands my friends did have destruct for a number of weird reasons, including egotistical band members, a key musician either starting to drink heavily or quit drinking altogether, or the stereotypical "band getting screwed by one too many bar owners."

When I adopted the student lifestyle, I initially assumed it would require monastic/hermit living conditions. At first, such a lifestyle was necessitated by the fact I was working 3 jobs while going for my M.A. When I started going for my Ph.D., I had a fair problem finding people in my department to drink with...one thought I was an alcoholic because I could have more than three beers in an evening.

Eventually, I found people to hang out with. Then, as we were all in grad school, they all moved out, and I found myself relatively friendless. I lucked into new friendships, and then those friends got jobs and moved away. So I got another batch of friends, only to have them either move or go into dissertation freakout mode. My last group of amazing best friends moved away last month, and I miss them terribly. And while by this time I realized that people would eventually scatter, it threw me a little more than did the previous times. By now, I don't work at BGSU and in fact have very little connection to the school, so I have no real idea who's gonna be my next hang-out friend...I just don't have many close contacts to my local hang-out scene. I am currently auditioning, and there are some really good candidates and wonderful people, but I'm not sure yet which ones of them will put up with me.

Aside from the transient nature of non-tenure academics, I have to put up with none of my departed friends being within close driving distance save two, and I'm really too busy to plan the full-day trips that hanging out with them would require. And I don't have time to do the Michigan-Wisconsin-Minnesota-Iowa road trip to go hit bars with departed friends/drinking buddies. Not only that, I have a number of friends who don't drink at all anymore. It's perfectly alright by me, and if someone doesn't feel it would be healthy mentally or physically for them to drink, I certainly have never wanted to push anyone towards it. But it does really change the normal evening out procedures in ways I still haven't 100% grasped. 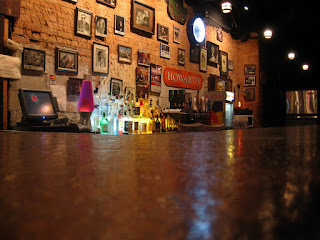 The problem is that I still love the bars. I really enjoy drinking as a social activity... I'm long past doing it to alter my mood swings... and bars have a great ambiance that allows you to overcome social anxiety and limitations on suitable topics of conversation. As a result, I've had some of the best academic, theoretical, theological, and philosophical conversations of my life over minipitchers. Bars relax me. But going to bars by yourself is just a little creepy, let alone boring, and I don't really have many people right now who I can call up on a whim and ask if they wanna share some drafts.

It's left me feeling a bit like I'm pining after lost glories. That's where, I guess, my current Steely Dan infatuation comes in. When I listen to them, their music is largely "whatever happened to the world, and why isn't it as cool as it once was?"...and this is how I've been feeling.

As I was checking my mail, I had the mp3s on, and "Midnight Cruiser" came up. I got a bit fixated on the line "For one more time, let your madness run with mine."

Most of the people with whom my madness used to run now live elsewhere. Consider this an open call.
Posted by themikedubose at 1:59 PM

I miss hanging out in BG too :(