The other day, I was watching American Chopper. For those of you not familiar, it's a reality/documentary show about an upstate New York family that builds custom motorcycles. 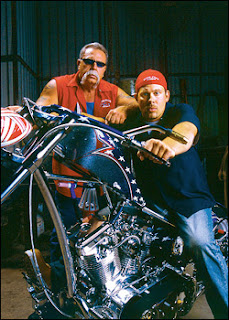 This didn't sound interesting to me in the abstract when I first heard of it, but my first show turned out to be a fascinating hour of television, and I am totally hooked. More than anything, it's a study of how machismo, family, and business interact. Hint: they express love for each other by yelling.

Anyway, last week's episode had a segment where the son/chief designer went back to his junior high and spoke to the kids who had learning disabilities. Paulie Jr. has them himself, had to get special help in high school, and he was there to give them a bit of inspiration and help them realize that in spite of their difficulties, they can become huge successes.

In what's usually an hour of machismo, it was quite brave and refreshing so see him admit to a disability. It also filled me with hope. If someone who's held up as a macho icon can admit to learning disabilities, maybe there's hope for society as a whole. We need to destigmatize and inform, and talking is the only real way we can do this.
Posted by themikedubose at 11:01 AM