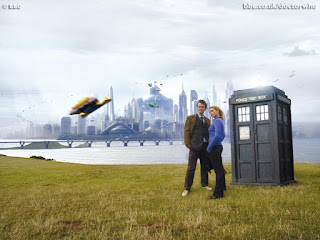 After a very long delay, I've gotten back into Dr. Who... watched the first two episodes of season 2 this weekend. If you're not familiar, try either BBC America, SciFi, or get the back episodes on Netflix.

All I can say is, wow, why can't American television be this good? Dr. Who is very cool, and that's not just because it's a scifi television show...something our major networks never seem to attempt. What's remarkable about the program is the depth which they give the characters...all the characters.

The good guys all have some sad, pathetic, or scary side to them in addition to their standard hero tendencies. The bad guys also have emotion and depth. Everyone is sympathetic to some degree, even the people/creatures you end up loathing.

In short, everyone in the show is a well-rounded, 3-d character...kind of like in life. In our standard American tv shows, there is a firm reliance on moral binaries. The good guys are all very good indeed. The bad guys are all totally evil. If there's someone who is a hero, our shows want us to root for them 100%. If there are villains, our shows will make them totally unredeemable.

Why are they trying to brainwash us? Why doesn't our entertainment ever treat us like reasoning, logical adults?
Posted by themikedubose at 6:32 PM

Everyone I know from LJ LOVES Dr. Who. I'm still afraid of the show; I think it's a left over from when I thought it was creepy as a child. Maybe I'll catch up next summer.