Last year on House, the status quo changed nicely. This is something that this show is very good at doing. Season 2 ended up with House's shooting and "cure" of his bad leg. The leg went back to normal (meaning severe pain and disability), but the whole next season became about House's efforts to achieve normalcy in the rest of his life...through drugs, antidepressants, police harassment, and much else. 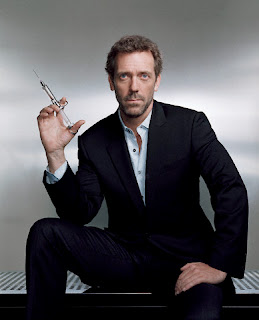 It ended cataclysmicaly, of course, with him losing his entire team. Rather than just applying the "quick fix" this season, though, the premiere promises to make "the quest for family/belonging and the haunting of the past" explicit themes for the rest of the year...but in a non-saccharine fun way, with sexual harassment and insults.

The episode ended with House auditioning a new team...out of 40+ candidates. This has the potential to stretch out for a while, and House does play well...albeit reluctantly...with groups. The "on next week's" segment brings back the old team, but in hallucinations...or alcoholic fever dreams, which I would prefer (imagine...if they were back but not really? for the WHOLE season?).

The writing was as sharp as ever. The House/Wilson interaction took on new levels, with House pulling the ultimate attack in a feud by breaking into Wilson's house and deleting tivo'd episodes of a reality show...personally, I'd kill whomever did this. And the House/Cuddy rivalry was also fun.

Line of the night?

Cuddy: Where did you come from?
House: Apes, if you believe what the Democrats say.

I need my House fix. I spent most of the summer working on a paper on this show, and even so, I was jonesing for the premiere...and it delivered the rush I expected, one I'm gonna have fun riding all season long.
Posted by themikedubose at 10:16 AM

I liked him better in Wooster and Jeeves. I'm just not convinced he really is that curmudgeonly to be House.