When I first moved to Ohio, I was ready for a musical change, because I was losing faith in most of the things I used to listen to. What passed for heavy metal in the nineties was boring, predictable, and monotone. The grunge movement left me cold, and I got tired of having bad musicianship, nonsense lyrics, and moaning/whining singers being passed off as "cutting edge." Pop music was the same incomprehensible and unredeeming waste land it ever was...it always sounded like music for those who don't really like music...or at least don't want to think about it.

Luckily, though, a friend of mine had a slight evangelical streak, and he took pity on me by lending me a massive stack of alt country disks. I tore through Uncle Tupelo, sailed through the Jayhawks, and listened to a bunch of others. One listen in particular sticks out in my memory, however.

It was a bleak midwestern winter's night, snow everywhere, in the middle of a stretch of days where I'd seen nothing but dirty snow and gray skies. I was coming home from Toledo, and I grabbed one of my friend's cds...the only real reason why was that I liked their name. So, into the cd player went Whiskeytown's Stranger's Almanac.

I'd never heard music like this before. It didn't sound like any country I've ever heard...which had been mostly New Country/cheesy Poison-esque pop with fiddles. It had rock tendencies, but it didn't fall into any of the typical rock cliches. The lyrics were intelligent, poetic, and magical...I think I replayed "Houses on the Hill" three times on that ride home alone. The music didn't just sit there and repeat itself...it built, to great heights, to wonderful conclusions, as when "Waiting to Derail" left me zoney and drained, wondering if I just listened to a tune or instead fought a heavyweight fight.

I became an instant fan, of the genre more generally, but specifically of Whiskeytown. When I next saw my friend, I cornered him and would not let him go until he gave me everything Whiskeytown had ever done. At the time, though, it wasn't much....one earlier album, one solo album from the singer...but I got copies of each, and I particularly wore out the solo album: Ryan Adams' Heartbreaker.

I became a big Ryan fan. When he released his second album (the week of 9/11, in fact), I got it immediately. I dragged my spousal unit to a Ryan show all the way in Cleveland, and she became a convert as well. We've seen him several times, and while I know others who've had bad Ryan experiences which seem to drive them to an illogical level of disdain and hatred for someone who is, after all, a mere musician, every show we've ever seen has been golden.

Ryan quickly went on some weird recording/cd releasing trance/spree, flooding the market with disk after disk after disk. Some, such as Jacksonville City Nights, I instantly liked very much. Some I had to learn to like, such as Love is Hell. Some, like 29, I had to scan for good tracks and throw out the rest...but nothing ever hit me quite the way that Whiskeytown disk did. 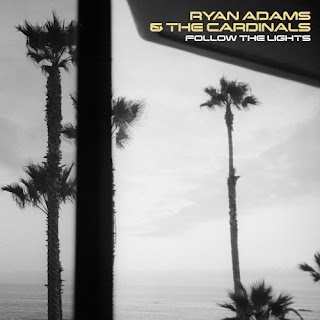 Today, on my drive to work, I popped in his new ep, Follow the Lights. It was like I was transported to that first Stranger's Almanac experience. It's only seven songs, but every one of them is magnificent. Two songs are completely new to me, and they did sound wonderful, but it's the rest of the disk that blew me away. Ryan finally recorded one song ("My Love For You Is Real") which has popped in and out of his live shows for years, and this recording makes you wonder why the wait was necessary. There's an Alice in Chains cover that works surprisingly well as an alt-country song...it's one of those covers that make you think this is the way the song should've been recorded, not how it was originally done. The other three tracks are all covers of previously released Ryan Adams songs, but they're all surprising and new. "This is It" sounds like it was written as an alt-country song rather than the alt rock recording original. "If I Am A Stranger" is done in a slow Heartbreaker-esque style. "Dear John" becomes a piano gospel song. None of it, however, sounds forced. Actually, every song on here sounds like the ultimate version, like how the song was ultimately meant to be.

EPs are usually throwaways, but this might be my favorite cd of the year so far. At the very least, it's reminded me of why music is such a large part of my life. After listening to it on the drive into work, I walked from my car into my office with every track stuck in my head at once, and although I have tons of other cds, this one might have to just stay in the car cd player for a few months.
Posted by themikedubose at 11:35 AM