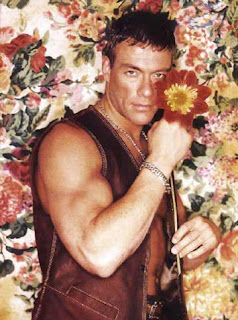 Slate has a rather remarkable article which is paying homage to Jean-Claude Van Damme. If you have never seen a Van Damme movie, you don't know what you're missing...

Van Damme has a lot in common with Stephen Seagal...except Seagal is a much better actor. Van Damme can't show any emotion, growth, skills other than kicking people. And yet this man has been in 36 movies.

I should hate the man, but in spite of my sometimes elitism about popular culture, I kind of like really bad movies...and Van Damme has made a lot of them. However, he's never really sunk to the true level of dreck that makes a classic bad film.

Van Damme still has a ways to sink yet. He hasn't done the marvelously self-aware commercials that Seagal has. He hasn't made anything as classically hideous as Over the Top, Commando, or Road House.

When he really begins to bottom out, I might have to start liking him.
Posted by themikedubose at 1:27 PM