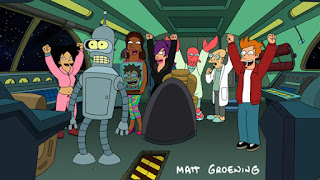 Over at Wired, they have a photo gallery of behind the scenes images from Futurama. The show is back this week, starting with a direct to dvd feature which will be edited down for Comedy Central episodes. Frankly, this is long overdue. You bring back Family Guy before this brilliant show?

Futurama is everything good television should be: equally stupid and smart, escapist and political, approachable and unusual. Moreover, it's great US tv sci-fi (something I've ranted about before). My favorite aspect? The complete and utter disdain...no, active dislike...for authority and industry. Whenever tv shows go against corruption in society, that evil tends to be limited to government. Futurama would take on government (see the hilarious robotic Richard Nixon) but would equally skewer big business. Isn't Mom's Friendly Robot Company really just Wal-Mart in disguise?

If I wasn't so durn blame broke, I would be lining up for this.
Posted by themikedubose at 10:39 AM