It was the end of our last night in New York City, and as we were walking back to the car after a cool night trip on the Staten Island ferry, the spousal unit asked me the standard, innocent question: "What are you thinking?"

This is a dangerous question to ask me. If I'm to answer truthfully, I'm either going to say "absolutely nothing but the chirping of my head crickets," say something so weird and alarming, it will immediately stop all hopes of further conversation for at least an hour, or just start going off onto tangent upon tangent until the questioner's eyes glaze over and they start shambling like a zombie.

In this case, however, it was an apt question, because the trip had made me mull over an awful lot...about multiculturalism, about the standard perception/fear of New Yorkers themselves, about class, about food, and about tourism, to name a few. My major impression, though, was of the unique relationship that New Yorkers have to New York as a place...and as a state of mind.

New Yorkers love New York. They think it's the best city in the world. Moreover, they take great pride in New York to the point of pitying other people for not living where they live. 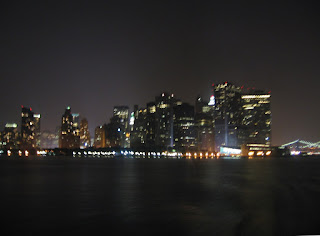 It's an arrogance, for sure, but it's an arrogance that has some basis in reality. Gotham is truly a magnificent place. In terms of food alone, I lost count of how many times I felt maddeningly jealous of its citizens. Products? Everything was insanely fresh, with a selection of which I've never dreamed. Restaurants? You could eat at a different place each day, enjoy amazing food, have a different cuisine every day of the month, and never run out of options. The same goes for people, sights, experiences.

It carries over into some rather possessive attitudes. I have lost count of the times in my life where, when mentioning the word "pizza" to a New Yorker, they roll their eyes before going on a dissertation about how pizza only exists where they are from, that the rest of the country...nay, the rest of the world is being fed some lie, some cheap imitation, some heretical abomination.

Now, the NY pizza I had was very nice indeed, but I'm just not ready to declare it the Platonic ideal and declare that everything else (including the Italian original, at which New Yorkers still sneer) does not equal pizza. I'm for variety in forms and types.

New Yorkers, however, are also for variety...hell, it's possibly the most diverse place in the US. But New Yorkers only like that variety within the borders of their city. They're diverse, but in an insular fashion, if that makes any sense

Really, the relationship between the city and its citizens is pretty unique. The closest analog I can come up with is between some obsessed Southerners and the South, although the circumstances are very different indeed.

The other "different" thing about New Yorkers you just can't avoid is their relationship to 9/11. I heard our host's significant other mention the towers several times during our final day, as if they summed up the city and acted as a crown to its grandeur. Without them, New York was just a little less "big."

Indeed, the effects of 9/11 are everywhere in the city. You can't go into the Statue of Liberty anymore because of terrorist threat. The subways and train stations all have "heightened terrorist alert--bags subject to search" signs. Most of the major attractions have massive security checks (which, incidentally, is why we didn't go to the Empire State Building). New Yorkers take this all in stride, however, as just another cost (along with commute time, dirty bathrooms, and expensive restaurants) of living in the greatest city in the world; they refuse to suffer any of the defeated attitude that plagues even the most prideful of Southerners.

I loved my time in New York. I'd jump at the chance to live in Manhattan, but the odds of me ever scoring a job that pays enough to allow me to do that are slim...I've come to terms with the fact that I'll never be a superstar academic. Would I live outside of Manhattan? That's a lot more problematic...I'm not sure how tolerant I'd be of either the commute, the pollution of surrounding areas, or the exorbitant rent.

New York was fabulous, and I can't wait to visit again...but as fascinating of a place as it was, and as interesting as were its citizens, I would still rather live in Toronto, which, in many ways, is New York perfected. They don't have the pizza, and it's still expensive as hell, but they have great street hot dogs, they're tremendously diverse, they have a cleaner and less confusing subway system, and they have better beer.

This was what I was thinking upon leaving New York. Of course, there were New Yorkers within earshot, so I censored myself somewhat in answer to the spousal unit's query, lest they think me anything less than a gracious visitor to their amazing city.

Because I truly do love New York like the teeshirt said. I also couldn't quit singing Sinatra the whole damn time I was there.

(This is, by the way, the last you will hear about New York City from me for a while.)
Posted by themikedubose at 11:57 AM

It's weird, when I was in NYC, it really *did* seem like I was in Toronto...only bigger and with taller buildings.