When I first moved to Bowling Green, one of the unique things was that, as a teacher, I would have an office, something I'd never had before. Unfortunately, my offices were utterly nothing to write home about. In my first one, there was a hole in the ceiling over my desk. The next one had ants. The third was in a basement. I finally got a nice one after the basement in terms of newness, but it looked more clinical than anything else...but the assistantship sucked, so I was only there for one semester.

When I switched assistantships, I became a research assistant working with a residential learning community. My office was in the same dorm floor as the community (so I could counsel them and impart the benefits of my magnanimous wisdom, I guess), and boy, was it sweet...I even had my own easy chair. The only real negative was that there was no computer, and in order to hook my personal cheapo laptop up to the network, the learning community would have to pay Information Technology $2k to turn on my office port. I never quite understood this...really, what did they have to do other than flip a switch?

My main concern, however, was in how to personalize the space, claim some sense of ownership over my surroundings. I brought my standard array of decorations I'd accumulated from my four offices prior, but they didn't seem to work. After all, blinking Christmas light may be fine when you share a room with ten other grad students, but they don't exactly make you look like an independent authority figure, a scholar, or an adult. I had no real artwork to bring to the surroundings...I was a grad student after all, and consequently broke, without resources.

I searched through my personal photos to see if any of them would work, but most were fairly dull. Lots of the blame for this lay in my camera. All I had at that point was the absolute cheapest camera I could find...it was a basement-level Kodak that was only about a dollar more than the disposables. The only thing it did automatically was flash, and that was on whether you needed it or not. There were a few really nice shots in my pile, but they numbered about three in a stack of a few hundred.

I didn't have time to do too much decorating, however, because this assistantship only lasted one semester. After that, I had one year as a research assistant elsewhere (where I got to use a couch) before moving on to the wonderful world of part-time teaching. In the three places where I was an adjunct, one of my offices was behind the abandoned five years ago records office, and its general state of degradation made decoration kind of pointless. Another one of my institutions put me in an office with four other people, so there was really nothing to personalize. The third place did not even give me access to an office, so I had to hang out in a building atrium, along with bored commuter students and fake fica trees covered with dust.

When I got my current job, I was thrilled for many reasons, not the least among them was that I'd finally achieved some sort of academic stability. It was the first time that my career wasn't at the whims of enrollment numbers, vindictive supervisors, or university politics. I was finally a salaried professional, after seven years of being the academic equivalent of a migrant worker. There were many visible signs of this transformation, including a profile on the department website, business cards, and a permanent mailbox, but the one I was most excited about was finally getting my very own office. 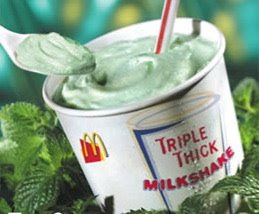 Of course, this brought up the question of how I would decorate the space. Obviously, the Christmas lights I'd rejected for my first solo assistantship office would not do, so, after finding out I could get my office painted a different color (I eventually chose a shade of green that matches exactly the wonderful McDonald's Shamrock Shake), I went to search for real artwork.

I knew I didn't want to just put up poster reproductions of Dali prints or blacklight artwork...that was something that undergrads would tack to the walls in their dorm rooms, and I was trying to distinguish myself...I was a professional, damnit. So, the spousal unit and I went to a few art shows to search for real, honest-to-goodness art. This was not a success. All the paintings would either cost my next five paychecks or looked like they were painted by five-year-olds...who were stoned on cough syrup and helium birthday balloons, no less.

The photo booths were no better. For whatever reason, the type of "art" photographer who shows up at art shows usually has a boring, sophorific range of subjects. There were a whole lot of shots of barns, horses, puppies, and the like. This would not do...not only did I not really want a photograph of alpacas frolicking in a meadow hanging in my office (it would make entirely the wrong statement), these prints were entirely too expensive, often in the $50-60 range. On top of that, anything under $100 just was not that good. My main impression from these art fair photo booths was "I could do better than that."

So, adopting the DIY principle full-force, I went out and bought a digital camera and decided to make my own artwork. I ended up with a decent entry-level Cannon and went hog wild. The coolest thing about a digital camera is that you can really experiment with very little risk. Something doesn't look good? Just delete it. Want to play with the settings? See the results before you plunk down money to get prints made.

I took some really good shots at first, but they were as much due to luck as anything else. At first, I would take a hundred shots that were worthy only of instant deletion before I took one that anyone would want to see. Really, the process of digital photography has been, for me, a process of self-education and discovery. I had to learn how to frame my subjects. I had to learn where to position the sun in my daytime photography. When I finally realized that my camera's worst feature was its flash (which makes everything look like a magnesium bomb is exploding in front of them), I started to play with natural lighting. 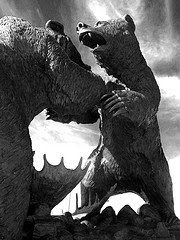 Lately, this experimentation has really started to pay dividends. I found an online article on how to take good black and white photos, which has really helped...my early black and white attempts just looked flat, but my newer ones pop and have more depth and character. Thanks to the advice of my friend Andy, I started to play with exposure speeds, which really helped some of my New York photos. And I just found an article on producing better low-light photos that I'm really going to study.

The rise of digital cameras is what made this all possible. If I had to use my dad's old analog, with it's dozens of lenses and settings, I would've never taken up photography. My "nothing automatic" analog camera gave me no control, but at least I knew what I would get. Moving any higher up the photography ladder would've required either spending gobs of money on experimental prints which probably sucked, or converting my apartment bathroom into a dark room, which was not exactly a practical choice.

The digital revolution has changed so much about how our culture operates. With MySpace, any band can internationally distribute their recordings, and this is one of the things that's shaking up the record industry. The bloggosphere means that anyone can be a writer with a legitimate audience. YouTube has placed the power over visual entertainment into the hands of the population for perhaps the first time ever. Wikipedia similarly has moved power over knowledge into the hands of the masses.

If you pay any attention to the media, though, you will hear most of the above trends attacked. Among politicians, the "bloggosphere" has become almost an obscenity. Many musical critics and artists (most often those signed to lucrative deals) bemoan the open-source nature of music that's causing the downfall of major labels (good riddance, I say). And even I have, on occasion, been guilty of thrashing on Wikipedia.

Digital art, however, is something that I find undeniably awesome. It makes me feel good to know that I am personally responsible for most of my photos, and that they work on some level other than "hey, that reminds me of a vacation." It's cool that I can have, both at home and in my office, photos from friends on display. I appreciate the fact that, instead of having to search for an exhibit of shots from my favorite artists (such as the incomparable Katie West), I can just check their website or have their Flickr streams delivered.

I truly believe in Art with a capital A. I also truly believe that it should not be the domain of others, and digital cameras help facilitate the democratization of Art...which is why they're one of the most important inventions of our time.

When I have my camera, there's always a part of me that's looking for subjects. When I see something worthy of immortalizing on (digital) film, there are two things I immediately do. First, I try to understand exactly what I'm seeing, why it's important, why I find it significant. Secondly, I try to find an interesting, unusual, or enlightening way to frame it, so that I can highlight whatever significance I see, so hopefully others can also see it.

Wouldn't it be a great world if everyone tried to do the same thing throughout their life?
Posted by themikedubose at 10:10 AM

Email ThisBlogThis!Share to TwitterShare to FacebookShare to Pinterest
Labels: photos, world of Mike