two festivals and a party

Last Saturday, I actually had a full complement of events on the social calendar. It's unusual to know that most of your day is planned out when you wake up, yet you will get no actual work accomplished...but it's a feeling I can live with. Anyway, much was learned.

The first event was a friend's birthday celebration. We all met up at City Park, drank covert drinks (alcohol technically isn't allowed, so rather than bring beer cans, I had a carafe of summer vacations. We then munched on snack food before playing croquet. I'm not sure why croquet, but the game is fine by me...it always puts me in a Heathers kind of mood. So what did I learn at this event?

The next event was the McClure Radish festival. McClure OH is apparently the radish capital of the world. I've been trying to go to this festival for years, but something always comes up...so this year, I refused to miss it. What did I learn here? 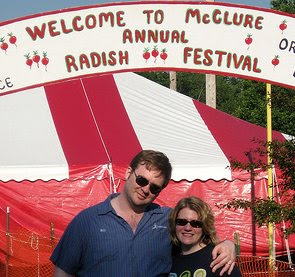 (my friend Andy has some cool photos of RadishFest here)

The final event was the Whitehouse Cherry festival. This one puzzled me, because I didn't even know we grew cherries up here, and I'm pretty sure that if we did, they wouldn't be in season yet. But it was still educational.