In honor of my addled-finger state, I have invented another drink, which I call "the sutured wound":

I was applying pressure to the wound, hoping against hope I could staunch the flow of blood. Meanwhile, as my head started to sway inside the confines of my skull, I could hear the uneasiness and pain enter my wife's voice. Shock started to set in, and I wondered if I would make it to a safe refuge, or would I instead collapse, blood pooling around my prone, inert body?

What had in fact happened, I wondered as later I sat in the emergency room, my memories still too fuzzy to really know for sure? Somewhere, deep in the confines of my subconscious, I had visions of rage-filled students coming at me with butterfly knives, and me disarming them, protecting my fellow instructors cowering behind me but getting sliced up and mortally wounded despite my eventual victory. Or had I lacerated my torso when, upon entering my house, a bomb planted by some crazed Sara Palin groupie exploded? Had my past as a hardened criminal finally caught up with me when my old comrades Lefty, One-eye, and Chuckles jumped me, whispering in my ear that no one really ever leaves the life?

Unfortunately, none of the above. My life just doesn't have that level of drama, much to my chagrin. I would rather be able to tell people that I wounded myself breaking up a hostage situation. Somehow, cutting my pinkie while trying to core a cauliflower for a curry doesn't have the same level of excitement to it. But at least it was deep.

I could've lived without going to the ER, but when she saw the wound, my spousal unit immediately got the "I must take care of you and protect you from your own macho bs" look in her eyes, so what choice did I have? Later, when she told me she was glad we came, I told her straight out that I knew she wouldn't shut up about it if I didn't go. I could get away with saying this to her, being wounded and all. Me being in pain will lessen her physical displays of rage.

When the ER staff saw that I had a sense of humor about everything, they were quite pleased. A nurse asked me if I needed another pillow, and I said only to stifle the screams. The doc then picked up a towel and mimed strangling me. When the spousal unit said she didn't want to look at the wound as the doc sewed it up because she might get dizzy, the doc encouraged her..."go ahead...you two have good insurance, so we could always admit you if you passed out and hurt yourself...more business for us!" I figure that you have to have a pretty sick sense of humor working in an ER, but I was quite surprised to find out it's almost the same as a restaurant worker's humor. There's a paper in there, I think.

I got a tetanus shot, and the nurse was good...I hardly felt it. When the doc gave me a local anesthetic, though...shots to the pinkey really bleedin' hurt. A good rule of thumb is when the doctor tells you something will "sting," find something hard to bite down on, quick.

Strangely enough, the lady in the bed next to me also was in for some cauliflower-related incident, but I didn't get particulars. I then asked the ER doc if he thought there was some connection, and we discussed it for a while. I brought up the possibility that cauliflowers were really alien brains out to destroy humanity by inducing kitchen-related injuries, a theory I think the doc liked. 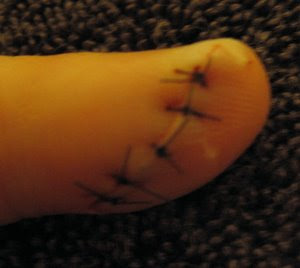 Unfortunately, even though I did get five stitches, the fact that they are on my little finger doesn't make them cool enough to brag about, in spite of their relative grossness. I tried wearing the hospital bracelet all night, but as there were no parties where I could impress people with inflated tales, it was kind of pointless. I did hang out with two friends, but they were notoriously unsympathetic.

That's the problem with cauliflower-related injuries...they just don't sound bitchen'. Story of my life, I suppose....I can't even hurt myself in novel, interesting ways.
Posted by themikedubose at 2:28 PM No comments:

this is your charge, America

Please, oh country that I love, do not screw this up.
Posted by themikedubose at 9:43 AM No comments:

Email ThisBlogThis!Share to TwitterShare to FacebookShare to Pinterest
Labels: politics

a smartass thought about writing

If I was one of those "gee, see how clever I am" academics, I would point out how Reagan is very close to the word regain, and I would tie that all into the nostalgia tendencies. I would then bring up the etymology of regain, twist something in that to make myself clever, and then throw in some dense theory written either in French or in some East European (but that I will leave in the original language, sans translation) to show that the desire for nostalgia and nationalistic resurgence was built into the linguistic infrastructure which inevitably let to Ronald Reagan becoming president. I would, incidentally, have a smug look on my face while I wrote the above section.

Luckily for the reading public, I am not that kind of academic or writer. But I wonder...if I was that much of a poet/gearhead, would I have an easier time finding a tenure-track job?
Posted by themikedubose at 5:49 PM No comments:

Email ThisBlogThis!Share to TwitterShare to FacebookShare to Pinterest
Labels: academics, world of Mike

The major benefit of grad school is, I think, the ability to multitask. When I was a grad student taking classes, I had to:

How did I do it? What makes this all the more fascinating is that I had a fairly active and regular social life, as did all my friends (each of whom were balancing similar workloads). But then, I was on fire. I could do thousands of things. The world was my oyster.

Today, I've had to take care of some students. When I finish with them, I find myself having to adjust back to writing. I go in the bathroom to shave, and I have to run back to the computer to type something important. I finish shaving, come back to type again, and have to run back to plug in the razor to charge...because I know otherwise I'll forget it. I have to then clear blocks where I can write, because when I actively work on my own stuff, I can't really do much else.

Sometimes, I find myself wishing I had half the mental faculties and multitasking ability I had in grad school. But then again, it did take me several years to get the dissertation done, so maybe I'm just being nostalgic.

Now, what did I have to do next?
Posted by themikedubose at 5:15 PM No comments:

I am experimenting with doing this blog over at Wordpress. Blogger has lots of advantages, but there is no way I know to back up your blog. At Wordpress, you can do that. So, please feel free to check out the new experiment at http://themikedubose.wordpress.com/. It might change, as I get ideas/try to avoid real work. Also, feel free to leave suggestions/pass judgments in the comments to this post.
Posted by themikedubose at 1:42 PM No comments:

Email ThisBlogThis!Share to TwitterShare to FacebookShare to Pinterest
Labels: interwub

events are conspiring against me

At the beginning of the week, I was looking forward to a long Wed.-Thurs.-Fri.-Sat.-Sun. stretch of writing. I planned to do a lot of work on the (now overdue again) book manuscript, get that damned theory chapter that's been bugging me out of the way, bust out pages like nobody's business. So what happened? 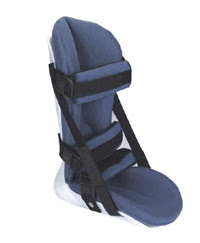 Wednesday, I had a doctor's appointment. When I gave myself runner's knee over the summer, the doctor gave me a knee brace. Said brace did stop the knee, but it also made me walk just differently enough to tweak my old heel spur in the other foot...and it just would not die down. Now, I have a nifty new night splint I get to wear. It's awkward. It takes 5 minutes to attach. I now have to limp/stumble if I have to go to the restroom at night. Plus, I have to get used to sleeping a completely different way. Wee.

Afterward, the spousal unit and I went to vote. That killed over an hour, but I really like the idea of early voting. I hope it causes more people to get out there and vote. The whole time I was at the office, though, I kept whispering to myself, "don't screw it up, America, don't screw it up." These two events, of course, led to me getting nothing done.

Thursday came, and I realize I had essay proposals to review. My students are picking a specific example of someone/thing that goes against normative gender roles and analyzing it. Needless to say, a large part of the assignment is figuring out what they can write about. So far, they want to write big important issue papers. One student wants to write about (paraphrase here) how guys see other guys. So my responses to them took all day, in between bouts of grading.

Friday, was that a day for writing? Of course not. While going to bed the night before, the spousal unit found some water patches in the hallway. This was kind of mysterious, as there were no leaks on the ceiling. They were still there the next morning, so I called maintenance. Our cool maintenance guy looked them over, realized they were next to a vent in our supply/utility closet, and checked out our water heater. Prognosis? It was "about to explode." So maintenance spent all day tearing out the old water heater and installing a new one. I of course couldn't actually write with all this going on, so I got my grading caught up, dealt with "why am I failing" student e-mails (as the result of the aforementioned grading), and ran to a produce stand to get some orchard-fresh apples.

That night, we had the Halloween party. I went as a Mad Scientist. Spousal Unit went as a witch, but a friend asked her "are you some Renaissance Fair person?" A good time was had (and I'll post photos of costumes and our carved pumpkin later). Of course, this meant a late night, so I slept in way too late on Saturday. Spousal unit was on the desktop from the time we woke up until 6, and I just can't do any serious writing on my laptop, as much as I love it.

No real work done so far today. Part of this comes from dealing with students, but there's also the case of I've been away from it for about a week now, and I need to re-immerse myself, saturation, the dunk tank method. Of course, it's almost lunch time...and I still have to write to my publisher-to-be and explain why I'm not done...and there's more student contact to come...and my computer's version of Doom is calling me...
Posted by themikedubose at 11:56 AM No comments: