The Year That Was - media edition

Yes, this is only a "top 9"...there just simply wasn't a tenth album I will claim as good. A weak year, musically.

Someone I Discovered Much Too Late

Why in the Hell Haven't These Opened Here Yet?

The Year in TV

My Year in Technology

Why buy newspapers when you can get Darkgate Comics Slurper

Posted by themikedubose at 1:31 PM 4 comments:

Email ThisBlogThis!Share to TwitterShare to FacebookShare to Pinterest
Labels: year in review

taking the chill off with a lovely beverage

I call this one "The Sub-Zero":

Posted by themikedubose at 10:57 PM No comments:

My favorite band right now is Two Cow Garage. I first met them when they got up and jammed with Slobberbone after one of their Wapakoneta OH shows. While Slobberbone was brilliant (two separate sets, each about 1 1/2 hours, with a 30 minute encore), Two Cow was an unexpected pleasure, unknown, unannounced, raw, energetic. They even did most of their own songs (save a jam/duet/whatever on "Give Back The Key To My Heart" with the 'bone), and each of their originals had a spark, an energy that I really needed to hear in rock at the time.

They were obviously talented, and I was taken with the guys. I wanted to tell all my friends about them. This being the era of the internet, I talked an awful lot online with friends from all over. Word spread. When their first album Please Turn The Gas Back On came out (awesome, raw rock, with some raw country thrown in for good measure, they had established an online fanbase.

As much as I liked album one, it was The Wall Against Our Back that really grabbed me. As well as pure rock your face off tracks like "My Concern" and "Make It Out Alive," the guys in the band started to really think about their situation, the career of an indy, small rock and roll group. They started to explore the class and status structure of rock and roll. Do you hold on to some vague desire for authenticity, or "sign on the dotted line" and become corporate? Do you remain who you are, in the face of overwhelming odds?

This continued with III, perhaps more explicitly. As someone who was struggling with my own job dilemmas (trying very hard to find a tenure-track professor gig, wanting to move into a job where I felt like a scholar and academic rather than just a mechanic, blindly teaching courses outside of my training, specialty, and interests, making entirely too little money and working entirely too much), I could relate. In fact, I needed to have this music. Realizing that other people in other fields were having the same issues as I made me feel a little less alone, a little more hopeful.

It's not much of a stretch to say that The Wall Against Our Back got me through my years of adjuncting, and III helped me adjust to teaching in a field pretty foreign to me. Their latest album, Speaking in Cursive (click on the link, buy it for $5, it's unbridled awesomeness) shows amazing musical and lyrical growth, but part of the reason I'm so taken with it is the theme of "what happens if we never become rock superstars? Is what we have enough?" which pretty much mirrors how I've been thinking of my own career. It's always nice to know you're not alone.

What made my love for this band even better is the personal connection I forged with the guys in the band. One of the first times I saw them, Shane, bass player and singer extraordinaire, came over to thank me for talking them up online. Every time thereafter, we talked a bit more, got to know each other a bit more. And while I don't know him nearly as well as I would like, I do think of him as my friend. I've also gotten to know guitarist/singer Micah, and this personal connection brings a new dimension to their music. I'm not just a fan. I feel I have to fight for these guys, push them wherever and whenever I can. 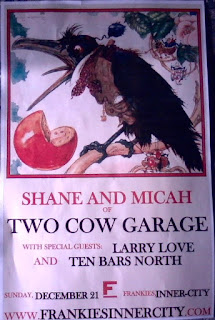 And, of course, see them perform whenever I can as well. After completely missing their last BG show (even though I was at the bar three days before, I saw no flyers or ads to tell me they were playing), I was pumped to find out that Shane and Micah were scheduled to play an acoustic show at Toledo's Frankie's Innercity. So I gathered up some friends and went, but it was just fated to be one of those nights.

The first issue was the bitter cold. In order to celebrate the first official day of winter, the weather plunged down to a lovely -2...not including the wind gusts of up to 35 mph. My car fought me, but it did eventually start. Of course, it took a good ten minutes to come up to temperature, and my foggy breath was steaming up the windows.

Of course, the drive necessitated going down many roads which have been studiously avoided by any plow or salt trucks, so it's always fun to know that at any minute, you can lose control, slide across intersections, and get run over by a similarly out-of-control semi. But in spite of the mortal peril, we made it.

There was the third issue, related to my inability to find a designated driver. It's always hard to see good rock and roll without beer, but hey, I love these guys, so I was willing. Of course, the bar had to rub my sobriety in my face by having the $1.50 special on PBR, Blatz, and Black Label...it was the trio of destruction, and I could not partake.

Unfortuntately, after an hour or so, we got the announcement: Micah and Shane were stranded outside of Cleveland in a blizzard. So, since I couldn't even drink my oblivion away, I instead had to settle for introducting my mad Romanian friend to White Castle hamburgers.

The guys at Freankies told me that Shane and Micah are planning to try to reschedule for next weekend, though. Hopefully I'll have a designated driver then...or at least, maybe it won't be so damn cold.
Posted by themikedubose at 12:29 PM 2 comments:

a day in my life

In an effort to satisfy those who are bored with my Twitter feed reposts (hopefully it's better than nothing, but who knows?), I realize that I need to provide some original TheMikeDuBose content...after all, you are the ones who pay big money for subscription fees to this site, who send me mountains of fan mail (the photos are particularly appreciated), who give up their jobs and family to follow me on tour, I realize that you deserve something just for you.

Unfortunately, though, my life was (up until yesterday) pretty much filled with grading, conferences, and similarly exciting stuff. And what did I do to actually celebrate was read a book. Trust me, describing myself sitting on the couch under a blankie turning a page does not make exciting, edge of your seat prose. In fact, I've done absolutely nothing that warrants extended writing.

But, in an effort to satisfy my throng of fans, I realize I have to provide something. So please forgive the randomness and look for whatever jewels that might come. After all, even a disjointed TheMikeDuBose is better than none at all. We present you, the reading public, moments in my day:

So there you have it, folks. My post-Fall semester has so far been taken up with an armpit allergy, saran wrap windows, and pizza dreams. Exciting stuff, huh? Rest assured that over the break, as I'll be occupied with syllabi planning, writing, and teaching myself video game theory, that there will be more wacky adventures. Bet you can't wait.
Posted by themikedubose at 10:33 AM No comments: