The first real video game was Space War!, but I've never actually seen the original. The first commercial game was Pong, but the first one I remember seeing was Breakout. We were living in Germany on an Air Force base, and the base pizza parlor had a console. I don't remember playing it myself, though.

Not too long after we moved to South Carolina, we got our first video game system. I don't remember the name of the system, but it had four built-in games: Tennis (a Pong derivative), Racketball (don't remember how this was different than pong), Squash (ditto), and a shooting game. In the last game, a big white dot bounced around the screen, and you got to shoot it with a Dirty Harry-esque handgun.

There was a video arcade near the SC base that I'd visit from time to time. On Fridays, they would let you play all you wanted from 8 to 11 for 3 dollars. I would go, jump from game to game, and play until my eyeballs felt like they were about to spontaneously combust. I sucked at the games, but I had one hell of a time killing aliens, shooting tanks, and stabbing monsters.

Later, we finally got an Atari 2600, which took the idea of video games, for me, from a curiosity to a really engaging diversion. I was particularly taken with Yar's Revenge (one of the most fun ways to shoot aliens), but I also remember me and my brother pooling our Christmas money to buy their version of Defender for $50...which is over $110 today.

The Atari was the last system I owned, but I did play others. Many friends had the NES, and I learned that I (a) sucked at Super Mario Brothers, (b) loved fighting in Blades of Steel, and (c) giggled at the racism of RBI Baseball (where all players were white). When I played the Sega, I marveled at the speed of Sonic. I didn't have a lot of experience, but I was pretty sure I knew what video games were.

Later on, though, friends made a point of undermining my outdated knowledge of video games. While I was busy getting a degree, my friends informed me, video games had grown up. There were intricate stories, a variety of genres, many points of view, more dazzling technology. I accepted this, of course...my "young punk" friends were more experienced in this than I. But I only accepted it on an intellectual level. I didn't really know for myself.

Then I got a Wii. Frankly, my main experience with the Wii to date is being constantly surprised by how I react to the games. I wasn't prepared for the atheticism/strategy combination of Wii Sports, for one. Boom Blox I bought because I wanted to smash things. However, there is much more depth, strategy, and subtlety than I was expecting. Wii Fit has actually made exercise something that does not bore me into submission. Exercise can be fun? Apparently so. 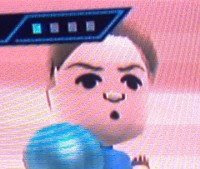 But mainly, I wasn't expecting the emotional aspect of the games. I find any number of Wii elements to be very cute. For those of you who don't know me, "cute" is usually the fastest way to turn me off, but I'm enjoying the cuteness of the Wii. Also, I'm reacting weird to the Miis. For those of you who are Wii-inexperienced, you create a virtual version of yourself and use that avatar to play the games. The Wii tends to populate the background of the games with whatever Miis you've created...celebrities, politicians, historical figures, and friends. I find it really funny when I'm playing a game and see Groucho Marx, Teddy Roosevelt, or some character from The Office. However, I also see Miis of my friends show up...and that makes me feel warm and good in ways I can't really yet describe.

Furthermore, I love how it attracts the non-video game crowd. My spousal unit is now a full blown addict. She's got friends of hers who've probably never played a video game in their life to enjoy the Wii.

The Wii continues to shock and surprise me. And I haven't even got to kill a single video game alien or monster yet!
Posted by themikedubose at 12:32 PM