has it been that long? 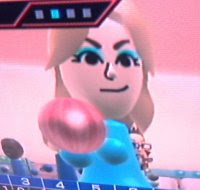 When I first met her, it was her smile I noticed. There were plenty of other things that could stick in one's mind, but the smile...it lights up rooms. It's amazingly warm, friendly, and inviting...and it makes me feel magnificent, when I see her smile, like somewhere, somehow, I must have done something right in my life to be so well rewarded.

She's the warmest person I know. One quintessential Lori moment? We took a very brief trip to Spain so I could present at a conference. On our third (and last) day, we were walking down some back streets in Alcala (just south of Madrid), past shops and boutiques. As we passed a bistro, a gust of wind blew down a sign outside a restaurant we just passed. The fairly burly restauranteer came out to reset the sign, but Lori already beat him to it. The man didn't need help and couldn't thank Lori anyway, but that didn't matter...Lori saw an opportunity to help someone and did so, without thinking.

She's also hilarious. Much of her hilarity is probably unintentional. Her stories, for instance, often follow their own interesting internal logic, which escapes most conventions of order...she can start out talking about her grandmother and end up in a discussion of jelly packaging, and it somehow makes sense to her. In many respects, it's like being married to Gracie Allen, which means my life with her will always be interesting.

She also can be fabulously lively and crude. She'd hit me if I told too much, but one example will suffice. Since we got a Wii, I've noticed that she can have a tremendously foul mouth. Sneak a serve past her while playing tennis? A throw in Boom Blox doesn't have the proper effect? She gets blown up in Mario Kart? You will hear language out of her that would make most sailors look twice.

The calendar says that come tomorrow, we've been married six years. While I still intimately remember the day (and the city hall ceremony, the room decorated with plans to expand Wooster Street, where we became contractually obligated to each other), I have issues with the time. You see, I have a hard time fully remembering what it was like to not have her sitting next to me, to not see her walking up the driveway and smile when she sees me, to not be able to hold her at night before we both drift off to sleep.

It's a day early, but happy anniversary, my dearest spousal unit. I can't imagine being without you.
Posted by themikedubose at 11:50 AM