Yesterday, while my mind and body was still feeling more than a little like cotton, I stumbled into my office, an awaiting student on my heels. I apologized for being a bit late, I said, but I had a late night.

I didn't really think to apply the term "concert" until then, but I guess it fits. It's a strange turn of events, though, for someone who publicly thought 12 years ago that I would never be a real musician. 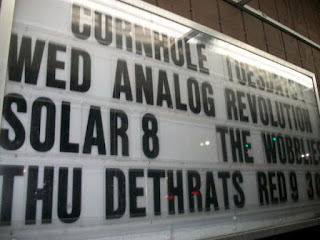 For those of you who (somehow) do not know, I am playing in a band called Analog Revolution (follow us on MySpace, become a fan on Facebook, follow our Twitter feed, buy our merchandise, website coming soon, end of plugs). We mysteriously formed while watching another band, have been practicing for several months, and have 8 or 9 original songs down pat.

Wednesday was our first gig as a band. For me, it was my first gig ever.

My singer and bass player both were visibly nervous as hell. Our singer went as far as worrying that she might throw up before we went on. I, on the other hand, tried to calm them down. After all, I said, we're professionals. We really know our material. We're good. We have the songs. We're rock stars, damnit, I'd exclaim, pounding my fist down on something hard for emphasis...yet said singer somehow didn't seem impressed.

Personally, though, I did spend the entire day trying to clamp down on my nerves...which (I can admit after the fact) were considerable. My stomach felt weird all day, and I was worried stiff I would forget my part on one our songs...a newer one which I start, no less. And what (something in the back of my mind insinuated) happens if our friends, who we've been cajoling for weeks to attend, don't like us? Will they keep in contact, will we be ostracized, or will we hear the infinitely more unbearable "well, um...it looks like you had fun?" 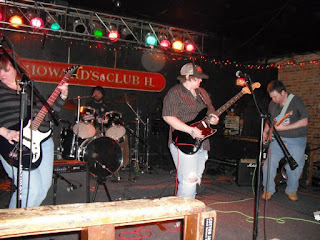 As it turned out, there were about a hundred people in the room when we went on. I would love to say our set went flawlessly, but I did screw up our cover, and our drummer did break a cymbal stand. Didn't really seem to matter, though, because for the most part, we were on. We sounded good, hitting that mysterious zone between loose attitude and tight playing. I didn't even stumble in any of my solos! And the rest of the band was awesome...better than I realized from practice, and very engaging on stage.

Better yet, people seemed to like our songs! Not only was the crowd large, they were very appreciative, with applause, catcalls, and even (somehow) dancing. While I had lots of wonderful friends in the audience, and they all did complement me, I also received a handful of "nice show"s and "you sounded great"s from total strangers...which makes me feel that we must've been pretty good after all. There were a few guys standing by the side of the stage when we were playing, and I heard one of them say "it's just really good hard rock and roll." This made me maniacally giggle.

It was a great night of rock and roll...both of the other bands were great...but the highlight was hanging out with my bandmates and friends, talking, drinking our "victory!" Bushmills, and closing down the bar. There's lots from that night I will never forget, but sitting around a table with my drummer, singer, bassist, and several friends, realizing we did good...it's now burned into my memory forever.

I'm obviously relieved as hell, but I'm wondering when I'm going to come down from the slight adrenaline high I'm currently experiencing. It's a feeling that was entirely too long in coming. I probably won't recover for a while, though, as we currently have four more shows scheduled...one of which we booked even before breaking down our equipment!

One thing's for sure: I know it will be a while before I quit making jokes that end with "trust me...I'm a rock star."
Posted by themikedubose at 1:27 PM

I had no idea you'd never been in a band. I guess the whole time we were undergrads I just assumed you had, like me. Sounds like an auspicious debut. Hail, hail, rock and roll!

Oh, I'd been in bands. They were just unsuccessful in spectacular ways. Check out my post (http://themikedubose.blogspot.com/2008/05/my-first-audition.html) for full details.