Cairo, Kentucky is a town that's located near the confluence of the Ohio and Mississippi rivers. Like most things related to the mighty Mississip, and even though I never actually have (until recently) stepped foot in the town, it's a name that resonates.

It is my junior year of high school, and I'm hiding in the back corner of fifth period history. The class is, of course, relatively boring. With hindsight, I realize how hard it must be to make any good sense out of “all the history of the world in the last five hundred years” in the span of a single school year. All I could tell at the time was that I was overwhelmed by nothing but bland, boring, faceless generalities. But even at the untested age of 16, I realize at some level that the specificities are where the real interesting stuff occurs...and without the quirks of history, I just can't force myself to care about the class even in the slightest.

I've long since tired of staring at my surroundings, and there are no close friends in the class to distract me. I've also long since bored of trying to perfect my hand-drawn renditions of various band logos and guitar designs...I suck at drawing anyway. As I'm sitting next to a shelf, I decide to quietly dig amongst its contents...just for something to do. The shelf is mostly filled with teaching supplies for various classes held in this room. After discounting a box of writing supplies and chalkboard erasers, I stumble upon two stashes of paperbacks, no doubt for an English class later in the day.

At the time, I didn't realize this was momentous, a sort of “monkey discovering the monolith” moment. But when I found those boxes full of copies of Animal Farm and Life on the Mississippi, something changed.

I dug Animal Farm, to be sure. Even in my inexperienced state, I was beginning to suspect (hell, I was a teenager—which meant I knew with every fiber of my being) that power and leadership were valuable commodities that should not be handed out to someone just because they desire them...which describes the point of the Orwell novel perfectly.

Life on the Mississippi, though, really captured me at a vastly deeper level. I plowed through that book at least ten times that year. The characters, the conflicts, the settings, all of them washed over me, taught a bored teenage version of me more than a droning teacher ever would. One image which always stays with me, however, is of some small village that, because of the river being the official state border, went to bed one night officially in Kentucky yet woke up the next morning as part of Missouri after the river decided to change course in the night.

I loved that book because it resonated with some of my deepest desires. I desperately wanted to escape my life of hardship and boredom, go out on the road, have a chance to not just reinvent myself, but to invent myself in the first place. I wanted to become an expert in something mysterious, I wanted to learn a new, mysterious, romantic way of life, learn it deep in my bones. I wanted to live where I had real value, and where that value had all come because I personally earned it, through hard work, perseverance, and innate ability.

In spite of these dreams, though, I stayed fairly pedestrian in my life for some time. I lived at home entirely too long after high school, took extraordinarily menial jobs, engaged in typically pedestrian irresponsible behavior, went to a community college that was in biking distance, and generally clamped down upon that fledgling Twain-inspired desire for adventure.

Flash forward to my recent Kentucky vacation. After days eating much smoked meat, drinking in lakefront bars, and holding many conversations both more profane and personal than expected, my awesome hosts offered to take us to a brewpub in Cape Girardeau, Missouri. On the way, upon hearing we would drive through the town of Cairo, Illinois, my mind immediately clicked onto Cairo's appearances in Life on the Mississippi, and I looked forward to staring at the river while reliving my memories of Twain. 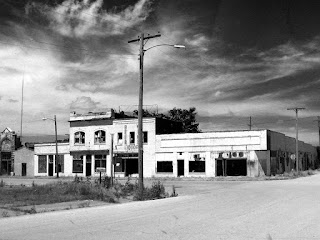 Time, however, had not been kind to Cairo. What had once been a town of over 15,000 has dropped to under 4,000. What was once a fairly grand main street is now a monument of decay and abandonment, with windows boarded up, paint peeling, and (in one case) a thirty foot tree plowing through the middle of one building. Our host informed us that the citizens are quite used to us college-types slowing down to take photos of the deindustrialized, post-apocalyptic landscape. However, we were informed, we would not be leaving the car, because Cairo had become quite a center of crime.

Cape Girardeau, our ultimate destination, was a complete and utter whiplash-inducing contrast of a town. I had never heard of the town at all (not in Life on the Mississippi or otherwise), but it immediately struck me as somewhere I wanted to be. Although it boasts a university I've never heard of (who knew there even was a Southeast Missouri State University?), it had a wonderful midwest college town atmosphere, tons of good restaurants and shops, beautiful houses, wonderful views. It was a truly unexpected jewel 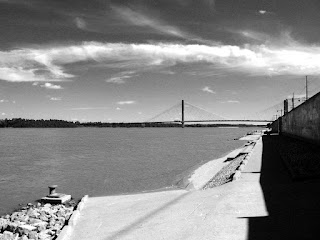 After our brew-pub meal, we even got a chance to wander down to the waterfront, past the flood walls, and stare at the mighty Mississip, much as I do whenever I get down to New Orleans, and it was (as always) glorious. True to form, it held all the mystery, all the nostalgia, all the Mark Twain memories I imagined as a kid, that I see every time I stare at its vast expanse and drift into my own dreams.

Because of the day's travels, however, there was an entirely new level of complexities to the river, which begged the question, How did the world fit in? Cairo, the town of which I dreamed, whose very name resonated with me on some deep, personal, and spiritual level? It was a mess, beaten up by forces beyond its control, pushed into obscurity and blight. But then there was the unknown town of Cape Girardeau, which was glorious and fun, which had been sitting there just outside of my realm of knowledge and expectations.

There were many lessons there, but as I was staring at the brown water of the Mississippi, most of them escaped me. Twain was still in my mind, but mostly as a counterpoint: how would Mr. Clemens, I wondered, respond to the dualities of current day Cairo and Cap Girardeau? What lessons of hard work, romance, and dreams would he find? How would the Mississippi of today stack up to that of his childhood?

As I gazed out at the river, I knew I couldn't answer for Mark Twain. More surprisingly, I couldn't even answer for myself. I have no idea where my expectations lie anymore, or even if I should have them in the first place.

The river was still there, though. It would always be there. It would just be me that's different, I thought, as I took one last glimpse at the water. We then left and went back to our host's house, where I prepared for the long trip home.
Posted by themikedubose at 2:25 PM