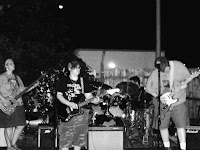 We were playing last Saturday on the deck of a Toledo bar called Woodchucks. After a set spent staring at the stars, enjoying the smell of a deep fryer, and blasting through our set, we hung out, drank, listened to the other bands.

It's the end of the night. I'm hauling my equipment out of the patio, when the sound man and the drummer for one of the bands (a rockin' power trio from Detroit) see me. The sound man says "You guys sounded great." The drummer says "guitar god!" I was a bit stunned as I thanked them before hauling my pedal board into my car.

It's during Junior High. My brother's jamming with some friends, and I take my first guitar (a "Chicago" brand Les Paul copy) in the hopes that someone will let me play through a real amplifier. I plug in my guitar, but I can't stop it from squealing. I feel like an amateur.

It's high school, and a bass player friend is having a jam session at his practice room. I find out about it when I stop by randomly, in the middle of a long drive I only took so I could smoke. Everyone else looks like they're having a good time playing, I think, as I watch them from outside.

It's a year after graduation. Some friends of mine are in a band, and their guitarist quits. They ask someone else immediately to play with them. They don't even consider asking me, and when I realize, I sink a little more.

It's three years after graduation. I have been playing guitar for a while now, but I can't get anyone to play in a band with me. I've had some spectacular failures of band auditions (one group was playing AC/DC but switched keys in the middle of a song). I've had an ad up at a music store for weeks before someone finally calls. I go to the audition, and everyone in the band is a good 15 years older than me. We play, but they're upset with me because I don't know every pop metal song note-for-note. I pack my car in a torrential downpour, the weather matching my hope.

It's one of a hundred times where, frustrated by my lack of success with an instrument I dearly love, coupled with 40+ hours a week of work on top of being a full-time student, I haven't touched my instrument in weeks. That's when a friend will call me to jam, and, upon hearing how damn rusty I am, quietly remind themselves not to call me again.

It's a year before I move up to Ohio, when a "good friend" drunkenly tells me, "Mike, you really suck on guitar." I smile and laugh, trying to hide how much I believe him.

I have always loved music. I always "got" playing music on an intellectual level...I could always think music, see the layers, know what needed to happen. I never had that strong of technical skills...I was always (and remain) a sloppy player...but I had feeling. However, whenever I pick up my guitar, most of the above instances immediately leap to mind, and my confidence evaporates.

I do what I can to hide my embarrassment and insecurity...long ago, I learned of the real value of performing bravado...but it's always there. I'm not used to anyone thinking I'm good at guitar...and since guitar has always been very important to me, to who I am, this means that I've always had to fight the feeling of being a fraud and failure. And when someone complements me, I always feel uneasy, as if they're just trying to be nice.

These are my issues, though, and I will work to overcome them. For now, I just want to thank everyone who has come to see our show intently for your time and attention and tell you how much I appreciate you seeing us...particularly if my own embarrassment or bravado has hid my appreciation in any way. And I want to really thank my current awesome band for playing with me...it truly is a dream come true.

I'll continue to be mentally screwed up, though...after all, my mental state is, by now, as big of a part of me as music.
Posted by themikedubose at 7:46 PM