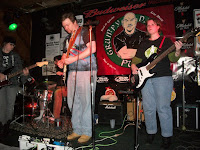 The other week, my band Analog Revolution (come see us play live soon, buy the shirt, end of plug) was playing our last show of the year with the awesome Hemline Theory, and I figured, hey, since it's the holiday season, I would get some candy canes to hand out to the audience.

The first thing you should know about passing out candy canes at a rock bar is that stage lights are very bright and shining directly into your eyeballs, so you really have to hurl them rather than toss. This leads to a certain percentage of the audience ducking and covering their eyes rather than catching the candy. Secondly, it's a good idea not to throw the canes with your pick hand...that is, unless you wanna lose your guitar pick in the process.

Hemline Theory played after us, and they one-upped us in the holiday audience-giveaway area. Where we passed out candy canes, they had homemade cupcakes...and they also had gifts for the audience. I didn't mind the one-upping, though, as 1) they've been doing this longer than us, and 2) I got some nice chocolate-filled almond cookies.

It also led to one of the best moments of the season.

After Hemline finished, I was talking to a friend who made the drive down from Toledo to see us. Partway through our conversation, someone I didn't know came up to our table.

I assumed he just liked the show, so I shook his hand. After he introduced himself (sorry, can't remember who it was...post-show drinking, you know) and complemented me on the set, he also said "I heard you and your wife have a child on the way...and I think you could use the gift I got from the band more than I can." With that, he ceremoniously presented me with a Santa Claus Mr. Potato Head. 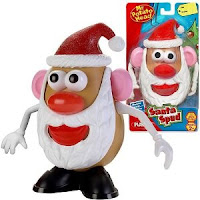 This, my friends, is the kind of thing that I love. To round out the year, I got to play a show with my awesome band. I also got to hang out with a good friend I don't see nearly enough. Furthermore, I had a complete stranger give my unborn child a Christmas gift.

True, it may not be on the level of world peace, but it does make me feel awesome about humanity and life.
Posted by themikedubose at 3:04 PM