I am a rock star

I am a rock star.

No, not really. In reality, I'm a guy who's married to a wonderful/pregnant spousal unit, teaches writing under an uncertain future (thanks, Senate Bill 5!), and who plays in a local (meaning we can't get gigs the next town over) band. But from the time I bought my first crappy guitar, I always had visions of being on stage, playing to a worshiping throng of admirers who would hang on my every note and scream at the end of the solo. It was my dream

This, of course, never happened for lots of reasons. I've known for ages I would never be a rock star. Going back to college perhaps sealed the deal, but I kinda knew long before that. But there are still times where, when I close my eyes, I wonder what it would've been like to play arenas.

I know, though, I will never be a rock star. So, a few weeks ago, I decided to do the next-best thing: I ordered some custom guitar picks!

I found a place online who sold custom guitar picks for a reasonable price. I went to town with GIMP on a photo from one of my past shows and made myself look like a cool line drawing. I uploaded my photo, moved some stuff around, and gave them my credit card number. A little over a week later, I recieved a bag of shiny, customized .73mm color delrin picks. 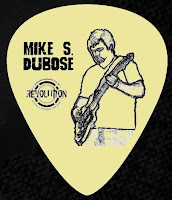 The picks are a geeky fantasy come true, something I've always wanted. I've given them to friends, most of whom seem inordinately thrilled to get a 50 cent piece of plastic. Some have told me they're the coolest thing they've seen. One or two (who were admittedly drinking at the time) said something about putting the pick with their special souvenirs. True, one friend, upon seeing the pick, said "DuBose, you're such a nerd" (admittedly, she does have a case), and my singer has threatened to quit the band if I throw a handful to the crowd during some gig.

This past weekend, I went to see Two Cow Garage, my favorite band in the world, when they played at a Toledo bar. I know both Micah, the guitarist and Shane, the bass player, so when I said hello to them, I gave them each a pick. During their set, Shane used my pick...and showed it to me from the stage. Maybe I became a rock star by proxy...just a little, mind you.

Afterward, I was saying my goodbyes. When I was talking to Micah, I told him that I showed one of my classes clips from a documentary someone did on them a few years back, and how it depressed the students. The students, I told him, focused on how hopeless it seemed to make it in the music industry. This puzzled me at the time, and, I told Micah, I couldn't figure out why the state of the industry was of such importance to them...because personally, I don't give a crap about executives, labels, or any of that. Instead, I care about bands and music. The industry? Stardom? Ultimately, it doesn't seem very important.

This does not mean, however, that I will ever give up my custom guitar picks. I'm holding onto at least a small fragment of the dream.
Posted by themikedubose at 2:42 PM