life in the swamp

Ripple effects. They're everywhere. Even, it seems, in rock and roll.

Way back at the start of the night, when my old band Analog Revolution played our first show, I remember being on stage, nervous as all hell, setting up my equipment. As I was running wires to my effects pedals, the guitarist from the third band started hauling his equipment through the stage door. He stopped and said, "Hey, cool homemade pedalboard, man!" Partway through the set, said guitarist hung out on the side of the stage for a song or two to watch me play. After we finished, said guitarist was the first person to come up to me to tell me we sounded good.

So went my first introduction to Sr. Bob Wobbly.

Bob started showing up to most of our shows...it was a sure bet that if I would look off the stage, I would see his ball cap. When his first band started not playing out frequently enough for him, he started another. When he got bored, he recruited my awesome singer and bassist for a third band. And when he found out Analog Revolution was breaking up, he asked me if I wanted to join him in what would be his fourth band. The man, it must be said, really likes music.

A few months ago, when his second band (the awesomely named Black Swamp Rats) were opening for Analog, I realized they were (in all deference to Kitty Glitter and , both of which I like) my favorite band of his. When I booked Analog's final gig, they were the first band I asked to play with us. And during that final gig, I ended up dancing/fake moshing/hurting myself when they were blasting on stage...all the while thinking "man, I'd love to play with them."

Now, Bob and I had already decided to play together, and I had thought long and hard about the new band...how we would sound, what we would do, what the theory behind our approach would be. I wrote about 11 songs, recorded eight demos, and had been (sort-of) working on lyrics. Only one problem: we had nowhere to practice. I would've offered my house, but there's not enough space...plus rock band rehearsals and 2 month old kiddies don't mix. We couldn't play at Bob's place, because he now lives above a pizza joint. While the band had good songs, a good approach, and would itself have a lot of up-side, it was also looking like that potential would take ages to reach...and it might be up to a year before we could actually play out.

Wednesday night, I got a call from Bob asking me if, rather than start a new band, I would rather just join the Black Swamp Rats as a second guitarist.

I thought about it for about half a nano-second before saying yes. I told him (honestly) I was honored. If he would've asked, I would've told him I would've rather played with the Swamp Rats than anyone else around...particularly since The Hold Steady continues to not call for my services. 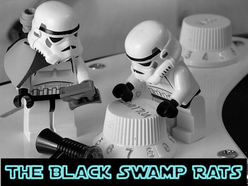 So it's official: I am now a Black Swamp Rat. So we're going to meet Monday and discuss strategy. I know not all of the songs we wrote for the 4th Bob band project (which, incidentally, was gonna be called The Bombastics) will work for the Black Swamp Rats...but hell, I don't care. They have a definite sound, and it's one in which I think I can easily fit and even enhance. Plus, I know they kick ass...so it should be really, really fun. Hell, the drummer's already sent me a "welcome to the band" e-mail.

Ever since the call, I have been slightly giddy. The last two nights, I've had problems getting to sleep because my mind won't quit working on guitar parts. It's gonna be good.
Posted by themikedubose at 8:42 AM