I have a seven week old child who, in spite of being loving, lovely, loved, and generally sweet, also in fact...well, she's a seven week old child. This means that, no matter how awesome she might be the vast majority of the time, there will inevitably be anywhere from 1-7 daily screaming fits/meltdown periods lasting anywhere from five minutes to three hours apiece.

I was, on some level, prepared for this. People, particularly pernicious parents, went out of their way to describe the screams I would face. Our parenting classes even had a video about this called The Blue Period...which inexorably built to the moral: no matter how much your kid might scream, don't shake them. Somehow, they left out telling us we should not drop-kick our kid, put said child in the microwave, slip in vodka into her bottles, or so forth (which, I guess, were inferred to just be common sense, unlike the shaking thing).

The thing is, though, as much as one can intellectually prepare for events, sometimes there is no substitute for actual experience. When my lovely, beautiful, exceptional-in-every-way child started to get upset, I expected screams. I did not, however, expect Exorcist-level wails...or, for that matter, the accompanying spinning head.

I do all the standard things to calm her down. I cuddle, talk in reassuring tones, pace around, perform a sacred hoop dance. The thing that tends to have the most effect is (to the extent anything actually helps, that is) singing to her. I sing Wilco songs. I dive into Son Volt, Neil Young, classic rock, indy rock, all kinds of things. But what, you might ask, has the highest "soothing loud babies" quotient? What artist works the most wonders on my kiddo? 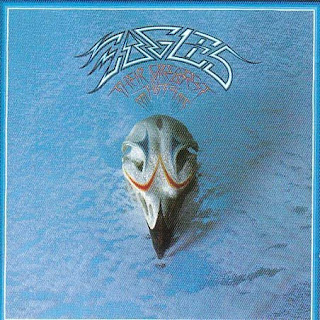 Seriously. My kid is, more often than not, soothed most effectively when I sing Eagles songs to her. My progeny unit finds The Eagles's Their Greatest Hits: 1971-1975 to be both calming and relaxing. She seems to like "Take It to the Limit," "Lying Eyes," "Desperado," and "Take It Easy" above the others. While I'm not saying they're the key to Magical Sleeping Baby Moment, more often than not, if my girl starts to come down from a meltdown, I've been singing one of these four songs to her.

This is actually fine by me. While I know how fashionable it is to utterly hate The Eagles, I've always kinda liked them...and I am now old enough, secure in my identity, and generally don't give enough of a rat's tuchus to feel bad about admitting that in public. I know this puts me at odds with many of my friends (including my old bandmates, who, when I suggested doing a punk version of "Lying Eyes," looked at me like I just suggested adding cannibalism to our stage show). I can't tell you why they hate them so much--probably something to do with irrational country music hatred--but ultimately, I don't care.

Although, if the singing quits working, one of you might need to bring me a tequila sunrise or something.
Posted by themikedubose at 11:00 AM

Every kid has her own song/band/genre. Syd loved "la Cucaracha." No lie. The boys like "Firework" by Katy Perry. Whatever works!