Much of last week was dominated by my darling Progeny Unit's case of being illin'. The poor little kiddo has acid reflux, so we have her on a drug and off the natural BoobJuice and onto a special formula (cost as if made from ground gold, awkward to construct, makes poo smell horrific). What's worse is the little tyke is still obviously in pain...it might be getting better, but it ain't there yet, and she ain't comfortable.

I don't want to minimize her discomfort, and I know she must be feeling terrible. I cannot, however, shake my personal viewpoint. Namely, I feel horrible and useless. She's not happy, and there's utterly nothing I can do about. My knowledge goes to feeding, to diapers, to rocking her, and to singing Eagles songs in my limited, creaky voice, and when all those fail me, it's frustrating. It generally puts a black cloud over my mood.

This is where I was when my Spousal Unit came home from work on Friday. She took one look at me and told me "you need to get out tonight. No, it's okay...you really need to get out."

Luckily, there were entertainment options. I live in an awesome town, and it was the weekend of the Black Swamp Arts Festival...which is truly one of the greatest weekends of the Bowling Green social calender. This year, it caused the clouds to lift.

Because of the BSAF, everything became shiny. 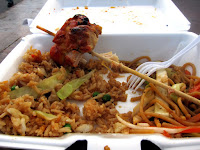 I walked downtown, hit the Thai food vendor (chicken on a stick, fried rice, and a noodle dish), and headed toward the parking-lot-turned-beer-garden. The chicken particularly is awesome and shiny...I half suspect they baste it in butter. Halfway through my meal, I saw my former bass player. In spite of her duties as festival chair, she sat down with me, hung out, and, as I shoveled delicious Thai food into my gullet, we had a great talk about our former band and our changing relationship to music. She was called away for festival duties/hobnobbing, but then some other friends came by...then some more...then some more. Eventually, some of us got close to the stage to watch the very cool Stone Foxes play before I had to head home. 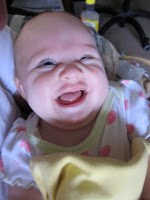 Next morning, my Spousal Unit had to work, so I was back on kiddie duty...but, far from being uncomfortable, the kiddo was in a positively bright mood. The Progeny Unit woke up just fine. She was happy when I woke her, happy when I changed her, happy when I fed her, and happy afterward. She fell asleep in my arms, and she was calm when I was able, with very little effort, to get her back asleep in her crib. She had a good nap, during which my spousal unit returned bearing carry-out.

After a meal/brief conversation, we got a call from an awesome friend who asked, "would you like me to come over and babysit your daughter so you two can go to the art festival?" So, an hour later, my darling Spousal Unit and I were walking hand in hand down main street, sun shining on our faces, looking at art, meeting friends, sharing an order of freshly cut french fries, and just having a wonderful time being a married couple again after a few months of being parents only. The art was even shinier this year...lotsa new artists, really cool and inventive stuff. Spousal Unit bought a postcard from this local artist who did watercolors of Halloween-esque stuff and interpretations of The Wizard of Oz. I saw about thirty seven things I just really needed to have and vowed to become a millionaire by next year's fest.

We got home, and our kiddo was just fine...beaming, even. After a good afternoon and dinner, I had to go back downtown as my new band The Black Swamp Rats was playing a show at the auxiliary rock stage. 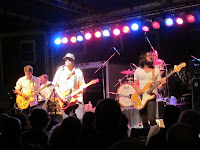 I got there a bit early and loaded my stuff into the bar. For some reason which escapes me, they had some hip-hop guy playing in the rock club, so I jetted out of there and went back to the main stage. I ran into my new bass player, we met my old bass player, and went to the front of the stage to see Black Joe Lewis and the Honeybears. The band was, for some reason, all wearing matching black pants and shiny white (albeit not matching) shirts...but in spite of the pseudo-costumes, they utterly rocked. Joe Lewis in particular played guitar as if he was strangling the thing...which is the way it should be.

When my bassist and I got back to Howards, there was (again, for reasons which escape me) a trio playing. There was a guy on a computer. There was a guy playing death metal guitar (albeit with less melody). There was a drummer who was wearing a gas mask. They weren't as good as they sound as if they'd be, and we were to follow them. Luckily, though, the room filled back up as we set up. It was a new experience for me...playing in a new band (with whom I haven't had a full band practice), without a set list. It went fine, though. Actually, better than fine. There was a packed room. There was fairly raucous applause. There was dancing...I first noticed the woman in the shiny red dress swaying, but there were multiple dancers in the crowd.

I did a few screw-ups during the set, but they were the kind that, unless you knew my parts, you wouldn't really notice. Fortunately, I'm really the only one who knows my parts, and in general, my playing--particularly in my solos--was shiny. I think I passed the audition, because as I was getting my stuff off stage, my bassist came over, shook my hand, and thanked me for joining the band.

I got a good audience reaction as well. Although there weren't a lot of my friends in the bar (two of my closest were there for the set, but my gig lined up with someone else's birthday), I did receive several compliments. My singer told me [name redacted-local rock star] was checking out my guitar, and the singer for a cool band (with whom Analog Revolution played our first gig) told me I sounded really good in The Black Swamp Rats. Later, I got further confirmation that I did alright when, as I was hauling my equipment out of the bar, [name redacted-local rock star] (with whom I've never talked) bounded over, shook my hand, and told me I did "an excellent job."

The next morning, my Spousal Unit told me the Progeny Unit went to bed around 9 and slept through the night. When the kiddo woke up, she was again happy. After the feeding, I put her down on her play mat, and she was smacking the hanging octopus and giggling...generally in a bright mood.

Strangely enough, right about the time The Black Swamp Arts Festival was over, my daughter turned cranky again. The only real lesson from all this? Art festivals make everything glow.
Posted by themikedubose at 12:24 PM