my changing relationship to music iii

I'm a guitar player, so I can tell you honestly the first thing you need to know about guitar players: we're weird.

To get to be good at guitar, you have to practice. If you play a guitar-centric form of music (as do I) and if you have clutzy fingers (as do I), you have to practice a lot. While rock bass guitar is relatively quick to get up to a reasonable skill level (which says as much about the standards for bass as anything), the zero-to-sixty for hard rock guitar players is not fast. You have to play. You have to practice. You have to have a finger-warmup regimen. You need to run through your scales (or at least patterns). You have to be as precise as possible...which was always a particular challenge for one as sloppy on the instrument as I.

This means that you end up sitting in your bedroom, in your garage, or on your couch a lot. You do a lot of study and practice...which isn't particularly fun to do or to listen to, but it is essential nonetheless. This also means you are probably not the most socially adept person in the world. In fact, you probably fit the stereotype of anyone who stays in their bedroom, reading and studying. You are probably, to some extent, a nerd. I am certainly no exception in my own mental music issues.

It is a great contradiction in music that musicians, in order to perform, have to be on display, yet they are not people with the right personality to be presented to the public. They are not generally good in crowds because they are not social animals. Yeah, drummers might be party animals...but bear with me, because I am talking about musicians.

In spite of not really being suited for it, guitar players do tend to want the spotlight. It is one of the reasons behind guitar solos. Also, it tends to lead to a certain (I don't want to say macho, because I've also seen it in female and non-masculine guitarists) attitude towards their craft. Some brag about using the heaviest thickness of guitar strings. Some swear by obsolete instruments which cannot stay even in sight line of being in tune. Many of us play harder than needed, breaking strings, picks, and even instruments in the process.

Aside from my brief period of using a galvanized steel guitar pick, my hard-headed attitude was most manifest in my complete and utter disdain of effects pedals. I saw them as a crutch. "Real guitarists," I told myself, "plug straight into their amp." Effects? They were to hide the fact you couldn't play that well. This also translated into my playing, where my guitar became a blunt instrument I used to bash notes into the listener's head.

I stayed in this mood for a long time. About six years ago, I did decide to get a multi-effects pedalboard...to use as a practice amp/toy. While I found it cool at first, it didn't take me long to start hating it. I had to program everything. Need to change a setting? You have to enter a menu, scroll down to the proper area, hit some buttons. It was a royal pain in the neck. Moreover, while some of the effects sounded okay, others (the chorus in particular) were trash. And when I finally tried to plug the thing into my amp, it was "you like excessive buzz and hum? Here you go."

Then I started playing with Analog Revolution. Part of me realized I needed a boost for my solos, so I started looking for a good overdrive. "After all," I told myself, "some of my favorite guitarists used a distortion pedal. Hell, if Micah from Two Cow Garage could use a Tubescreamer, a distortion pedal couldn't be all that bad. I can still be tough with a distortion pedal." And after some moderate equipment struggles, I got a good distortion pedal...and fell in love with the resultant creamy sound.

Then I found myself at a used music store, and I spotted a cheap phaser pedal. I had no real need for it, but I tried it out anyway...and it sounded kinda coolish, so I incorporated it into my music/effects worldview. Then I decided to use my old wah-wah pedal (which is bluesy...so it didn't violate my no effect rule in some way), but it broke on me...so I replaced it with an envelope filter. Then I got another pedal...and another...and another.

Eventually, I admitted to myself that I had become an effects pedal addict. I had a friend help me build a pedal board for all my effects, and it is mighty. It contains: 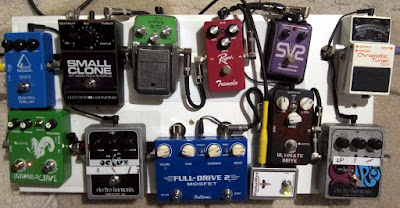 It is massive, I admit. In fact, a friend of mine (who plays keyboard for Kitty Glitter) told me he now uses my pedalboard as the measure by which he judges all others. I'm sort of proud that, much like 7-11 has become synonymous with convenience stores, my pedalboard has become on some level synonymous with the de facto guitar effects collections.

I didn't become an effects head overnight. It was not, however, just a matter of buying more stuff. I moved away from seeing the guitar as a sledgehammer to use during solos. Instead, I started to become interested in sound textures. I started to think about my role being to add emphasis, to add dynamics. Rather than just beating people over the head with my guitar, I started to really think about improving the song, and in the process, my guitar became a much more multifaceted instrument, capable of so much more. I started to let both the guitar and the song take center stage.

Of course, there are downsides to my new approach. I have to carry more stuff...my car is packed when I transport my gear, and when I can't leave my stuff in my practice space, my tiny house looks even more crowded than normal. I take much longer to set up and tear down my rig...even the drummer beats me off stage. Some people seem intent on using my pedalboard as something else about which to mock me...which is especially puzzling when such abuse comes from, say, U2 fans.

I don't care, though. I love my pedalboard. I love my effects. I love the textures they add to my playing. I love how I can enhance the song.

And my love for effects cannot at all be attributed to a quest to prove my manhood in a "hey, I got more pedals than you." Nope. Not at all.
Posted by themikedubose at 12:24 PM