on tattoos and science fiction

It was when I was getting my tattoo when I realized I am actually the protagonist in a science fiction story.

Someone recommended to me that I not go alone for my first tattoo because it was possible I might react badly...to either the experience or to the ink. This sounded like wise advice, so I asked a "friend" to accompany me. This "friend," however, spent the entire trip to the shop asking me such soothing questions as "Are you nervous?," "Having second thoughts?," or "Is your fight-or-flight mechanism kicking in?"

Now, coming from most people, these would be reasonable questions. However, my dear "friend" was asking less out of concern than out of personal sadist joy. However, the simple truth was I felt fine. I told him I got my initial sketch done five weeks before, and I'd had way too much time to get used to the idea. The long wait to actually get to my appointment was, I speculated, closely akin to a waiting period for purchasing a handgun...a built-in cooling off period, if you will.I was totally calm, cucumber cool, both mentally and physically. I felt fine as I waited for my artist. I felt fine as he showed me the sketch. I felt fine as he put the transfer on my arm.

Then he started the outline, and I...felt less fine. It wasn't the pain...which, at the time, resembled a cat scratching you...sometimes playfully, sometimes spitefully. I've had cats. I can deal with that kind of pain. No, for reasons I couldn't quite fathom, I was starting to black out. The world was becoming gray, foggy, and echo-y. We had to take a break, and I had to pause to regain my breath more than once, but I was borderline passing out. 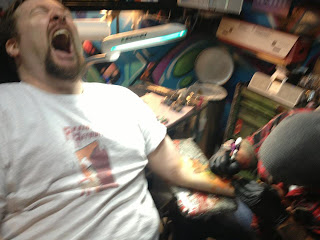 Strangely enough, once a half hour was over, it was like someone flipped a switch. I went back to feeling fine. No more blacking out, even when we got to parts of my arm where the needle started to hurt more.

(I should note that while the photo to the right was not faked, the pain really wasn't as bad as it appears. It would hurt like hell when my artist started shading, but then, as he moved the tattoo gun around, the pain would vanish. This was just taken as he started on a particularly sensitive part:  the far inside of my forearm.)

For about the three weeks before (and up through the full experience of) getting the tattoo, I was fully convinced that I felt no fear or regret.  Why would I?  I had been thinking of ideas for a full three-plus years. I picked a concept which had great personal significance and which I knew I wanted on my skin forever. I fell in love with the design from the minute I saw the brief sketch, and the final design looked even better.  Plus there was that waiting/cooling-off period bit courtesy of picking a highly in-demand artist.


But there I was...close to blacking out, in spite of any awareness of why on my part. 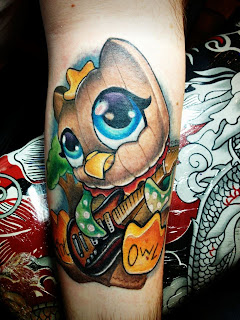 I thought about this briefly while actually getting inked up. After the artist finished with my truly awesome tattoo, my friend drove me home, and we discussed my close-to-unconscious behavior...well, I discussed as my friend mocked. Our ultimate judgement?  My mind was just blocking out my fear. I actually did experience the fight-or-flight response...I just wasn't aware of  it at the time.

A week or so later, I was hanging out with my driver-buddy again, and he remarked that when we went to the Toledo German-American festival the year before, I was quite miserable and goading our companion that night into arguments.  This came as a bit of a shock to me, as I remember the night as being nothing but fun. It seemed, though, I had stumbled onto another instance where my mind was blocking any awareness of my emotions.

Then I thought about the beginning of my time on antidepressants, and I remembered a few instances where my wife had to tell me I was really stressed out...and me only being vaguely aware of my own level of anxiety on each occasion.  The more I thought of it, the more instances I could remember of not really being aware of my emotions.  And the longer I take the Zoloft, the more I become aware of not always noticing my moods.

Something is clearly not right. I have some problem with my own emotional awareness. Something is not right between my conscious and my subconscious. Why aren't they talking? Was I born this way, thus making me substantially different from my fellow humans on a molecular level, making me the next stage on the evolutionary (or, more realistically, de-evolutionary) ladder? Is my mental condition symptomatic of some deep physiological malfunction in Gaia? Have I been altered by some higher form of existence, either ethereal or extraterrestrial? Am I maybe a robot, only slowly becoming aware of mental programming errors in my neural net? And what magical powers exist in my tattoo which make me aware of this momentous incongruity from mankind in general?

Personally, I'm hoping for robots. Robots are cool.
Posted by themikedubose at 3:48 PM