on shifting realities and acoustics

Lately, I've been contemplating the transience of life.

Transience is something I've had to deal with for some time.  I grew up as a military kid.  While my dad made a point of trying to stay in the same place for as long as he could--meaning we only moved only every five years or so.  Most other people were gone after two years.  As a result, every school year meant finding new friends...even getting a new best friend each year.  Strangely enough, I had two different best friends named Greg two years in a row.

When I was working at Little Caesars, we were happy if someone lasted six weeks.  We would hire six people, hoping that one of them would still be there in two months.  We used to joke that we would only start to try to remember their names after two weeks...only we weren't really joking. I still remember an awful lot of people with whom I worked.  Many more, however, are utterly lost to me...they never made it past my short term memory.

My life in college is also marked by constant change.  Friends move onward every year.  Students go away every four months. Even people who stay in the area regress as their lives change.  One can go from having great friends one year to having no social life at all the next.  I know...as this has pretty much happened to me.

Music has been a constant in my life, but even that has change.  Bands break up.  Musicians move away.  People quit, drop out, just plain stop being there. Conflicts arise, turning friends into acquaintances, acquaintances into strangers.

This is, I have realized, what I need.  I have a great band (album coming in one week), but I still need a musical outlet which is 100% my own.  So, for a part of my musical existence, I am going it alone.  It means stepping out of the shadows, abandoning my support structure, leaving behind even my dear effects pedals and distortion, relying only on my acoustic guitar and my voce...but it is what I need.

I've already done two open mic nights.  For my first performance, I got a cold two days beforehand.  I had a brand new guitar cable freak out on me, causing my guitar to cut in and out.  I broke a capo.  My kazoo flew out of my holder.  A friend told me he never heard anyone have so many technical difficulties during a solo acoustic set.  But I got through it and even got some complements. The second time, none of my friends came, and the only people I knew in the bar were the bartenders. My set, however, went much smoother. I got good applause after each song  Two people danced during one song.  And the song that got the biggest reaction?  One of my originals. 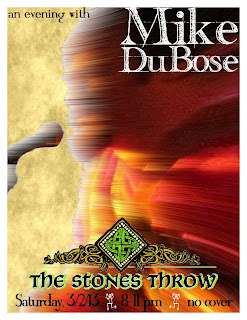 It's an amazing feeling to know I can be self-sufficient.  Doing the occasional brief set, though, is only a step.  So I am moving forward.  I am now booked for a full evening at our local Irish-esque pub.  I will play for three hours.  I have been prepping an amazing array of cover songs and am polishing up some originals. I am getting banter ready.  The flyer is made.  The invite has been sent.

There is, of course, some risk.  My voice could give out.  My originals could bomb.  Frat boys could come in and laugh at me.  I'm not going to say this does not scare me.  But the reward will be something I really need.  I will know 100% that I'm good enough to do this by myself. And I will know 100% that I have something that no one can take away from me, that will last as long as I want it to last.

I've had enough change.
Posted by themikedubose at 10:08 PM