It's often the small things in life which bring the most joy.  Sometimes it's the most damn strange things. If one is very, very lucky indeed, the two might team up to present something wonderful.

When my parents were up a little while ago, I showed them the film Despicable Me, because, well, it's awesome.  My daughter would not sleep that night, partially because her grandparents were in and partially because she had a cold (however, in the quest for honesty, I should say she generally looks for any reason whatsoever to not sleep).  When she saw the movie, she was enchanted.  She particularly was fascinated by the minions...as am I. Seriously, how can you not love them?

As luck (or sequel marketing) would have it, the current Happy Meal toy is an assortment of minions. In fact the arrival of the cool minion toys coincided with the restaurant's Monopoly game. It's the perfect storm of crass marketing for weak-willed, addicted twerps such as myself.  So I got Monopoly game pieces, while my daughter gets minions. 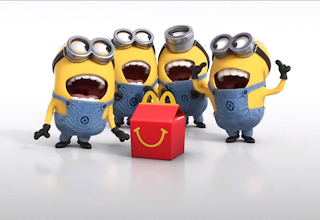 For me, this isn't the best deal. I've only won the crappy free McFlurries and consumed too many empty calories (which I'm firmly aware I do not need).  Sylvia, on the other hand, now has a nice collection of minions.

Let that sentence roll around your head for a minute:  "My daughter has a following of minions." It's truly awesome.  I personally have always wanted my own minions (and no, my students do not fit the role;  they are nowhere near loyal enough).  Hell, I'd be happy to even have a henchman.  Or even a graduate assistant.  Alas, I have none of these...so I don't even really have a need for my secret lair.

My daughter, on the other hand, already has minions...and she's just a little over two. It's quite awesome to see her running around the house, asking "where are my minions?," or hauling a few around with her, saying "come on, minions." It warms the heart, it does.

To be honest, though, I do worry a little bit that she'll get used to having minions, try to make it a life-long condition, and become a super villain.  I hope not.  I will, however, support her in her endeavors no matter what she decides to be...just as long as she doesn't get a Ph.D. in the humanities...
Posted by themikedubose at 3:26 PM

In fact the arrival of the cool minion toys coincided with the restaurant's Monopoly game. It's the perfect storm of crass marketing for weak-willed, ... emonopoly.blogspot.de