When I first encountered Jeff Smith's Bone series, I found it to be revolutionary. Not for the wondrous artwork, surprisingly funny dialog, or the unexpected depth of emotion, narrative, and complexity which continued to reveal itself to the reader. It was for one reason: the inclusion of the stupid, stupid rat creatures.

For those unfamiliar with Bone, I do pity you, but a bit of orientation is required. It is the story of (to employ the brief movie pitch description) three creatures who get lost in a strange valley and find themselves in the midst of a war between several magical species. One of these species is the rat creature. Bone introduces us to them with two deserter soldiers, who are fierce, a little scared, very hungry, and quiche-obsessed all at the same time. From that point on, though, most of the rat creatures are soldiers, dedicated to wiping out the opponents. While the first two are cute in a way, the main body of the rat creature army is downright frightening. None is more scary, though, than their leader: Kingdok. 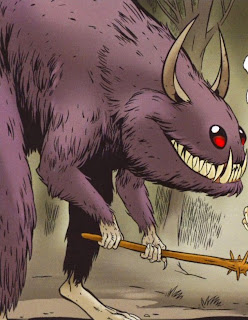 When I first ran across the drawing of Kingdok, I stopped in my tracks. It was not just because of the excellent character design.  What truly struck me was Kingdok was the closest thing I've ever seen to capturing how I feel my depression monster must appear.

As soon as I realized I suffered from depression, I started to look for metaphors to help explain how the disease makes me feel. It's not easy, because depression is much, much more than feeling sad.  I feel like my body is being smothered with a heavy bag pressing down on me.  I feel the weight on my head and shoulders.  I feel the doom and sadness flowing down on me.  It doesn't matter how I feel about the particular depression triggers, whether they make sense or not.  It's coming to get me, and there's little I can do to avoid it.

With all respect to Toby Allen's wonderful concept, Kingdoc is the perfect embodiment of my depression monster. He inspires the right amount of fear to set me on edge, but he's also imposing enough to know there is no escape from whatever he has planned for me.

I've been battling the depression monster this week. This time, there are many triggers at work, some I'm open about (the failure of my last surgery, another impending surgery, the financial hit of this all, falling behind at work under a pile of never-ending grading, not being able to get solo music shows, not one person I know taking an hour out of their Friday night to come see my band), some I don't want to discuss. And there would be value in discussing many of these.  However, when the depression monster comes, all that goes out the window. Instead, I just feel doomed.