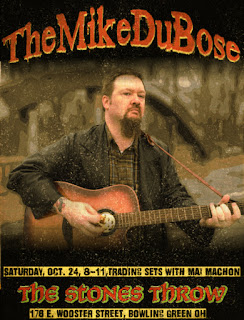 I have a show next Saturday, October 24. I have high hopes that I will be joined by my colleague/tromboner Nick Zoidberg. This time, I will be splitting the bill with Max Machon (a nice guy and a good songwriter). The show's from 8-11, and as soon as I find out when my slot is, I will let you know. I will have copies of my debut album Skeleton Coast for sale, alongside my handmade tee shirts. I've got new originals and new covers to debut, so it should be a really fun night. I would love to see you there.

I am currently recording an album. No, not the album I told you about a while ago (which is still being delayed for...um, reasons). I'm talking about the previously announced second album project. I have drums recorded for all the songs. I have acoustics and vocals recorded for three of the songs, and I have distributed these to my awesome bassist Steven Guerrero, with whom I play with in Midwest Tourist. Steven also does solo music under the name Flat Earth Agenda, and you should buy his album. I'm thrilled that Steven agreed to play on the new album.

I still have to do more acoustics and vocals, so I can get the rest of the songs to Steven...but this damn death cold/flu/plague I have is slowing up the process a bit. As soon as I get the bass-added tracks back, it's time to finish the arrangements and record the rest of the instruments...and I'm thrilled that Nick Zoidberg has agreed to help me with all this.

I might throw some demos up pretty soon, so you can hear what I've been up to. The one thing I'm lacking? A good name for the album. Suggestions are welcome. Hey, give me a great name, and I'll even give you album credit!

Oh, did you hear me say I have new tee shirts for sale? I did these a little while ago, and they're pretty cool. It's all handcrafted, so each one's a little bit different. Hey, it's the arty touch! Supplies are limited, so shop now! Plus you know you've always wanted to have my face on your chest.

I also just got a November show at Iggy's in Toledo. I will be playing on November 27th, opening up for My Hated Friend. They're pretty funky and trippy...good dancing music! I'm not sure what time I go on, or who else is on the bill, because I just found out about the show this week. As always, more details when I get them.

Other than that, I'm still working on more shows at new venues. Losing the Adrian shows was a blow, but I"m pushing to recover. Hey, any of you own a music venue? Need an old, fat guitarist to entertain your friends?
Posted by themikedubose at 5:11 PM