stringing together this year's notes

I still get nervous before shows. It's not horrific or anything, and it's certainly not close to being called stage fright. It is, however, still there. My stomach feels a little funny, and once I get to the venue, I have problems talking to people. So I have to apply a laser-like focus to getting set up and mentally prepared (which I hope doesn't come off as jerkish). The second I hit the stage, though, and break into the first chord, I'm generally okay, fine, wonderful even. Everything else is downhill.

I played an emergency gig last night at The Stone's Throw. They have the best open mic night in the area (The Hump Day Revue), so whenever I feel the need to break in a song, blow off some steam, or just get back on the stage, they're my go-to spot. I got there early enough to hear the host break into a Buddy Holly song. Grabbed my pre-show Guinness and grabbed a seat, only to see that the second act was a friend (and the singer for my old band The Black Swamp Rats). I went to set up my merchandise suitcase just as my friend went into "Demons," my favorite song of his (from his band Kitty Glitter). 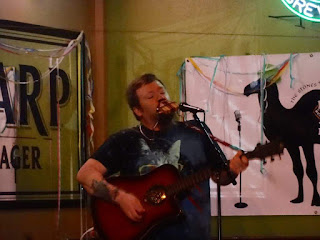 Then it was my time to hit the stage. It was a strange night in that the bar was packed...but it was mostly middle-aged adults and beyond, plus a couple of families doing a late dinner. Because of the families, I didn't think it would be right to do my newest Christmas song ("Consenting Elves," about partying elves at the North Pole and sexual consent), but I did do "I Don't Wanna Be Depressed This X-Mas." I had to do one of my holiday songs, as I now can't do them until after next Thanksgiving. I also did an acoustic cover of Motorhead's "Overkill" (RIP Lemmy)...which was probably the first time anyone anywhere has ever thrown a kazoo solo into a Motorhead cover. I got six songs total, and then I packed up to make room for a ukulele trio. Really.

It has been an interesting year for my music. I had a great run with one version of my backing band The Antidepressants, which included a festival gig. Then the drummer dropped out, the bass player moved to drums, his neighbor came in on bass, and several more gigs (including another festival). Then that drummer bought an RV and left to drive across the country with his girlfriend.

Solo-wise, I started the year determined to break into new markets. I got a gig at a farmer's market in Michigan. The first one was rainy and sparsely attended, but it was still fun. When I pulled up for my second date, I found out they had double-booked the show...so I turned around and fumed on my two hour drive back home. I also booked a bunch of shows with a new venue in Michigan. I played the first show with my trombonist and had a good time (even though no one was there). Then the rest of the shows were cancelled on me. I still had my Bowling Green and Toledo venues, however. Partway through the year, though, the Toledo booking company went out of business, not even allowing me to finish out my last scheduled date. None of this was exactly good for the soul, but luckily, I still have Bowling Green. Still gotta expand, though.

My alt-country band Midwest Tourist started the year with a bang. We played an early January show (videos of the whole thing!) with a dear friend and songwriting inspiration Micah Schnabel. We played a February show where I moved over to electric guitar (and briefly changed the genre of the band). In March, we did a Couch-By-Couchwest video (in which I wore a funny hat). Then we just kind of stopped. We were going to record an album, and we got started. Then we were interrupted by band personnel turmoil. We got close to recovering from losing a member, and then said member rejoined the band on a limited practice schedule. Now it's been months since our last rehearsal, and there's no telling if, when, or where we will play again. Welcome to the holding pattern.

I had plans to record and release a decent amount of stuff this year. I announced 2015 album project number one. It stalled. I announced a Christmas single. It never happened. I announced album project number two, which I'm doing all by myself. It's going fine, but I had my computer die on me right when I had budgeted recording time. Tomorrow, I get back to it. It's gonna be great (I'm already getting much better quality than on the last disk). It's just not gonna be a 2015 release. Better late and great than never, I guess.

So I've had a lot of strange feelings towards my music career this year. I've lost gigs instead of gaining them. I've lost one band and seen the other one effectively mothballed. I've seen music projects pushed and pushed. On the other hand, I finally did get to hear my music played with a full band. I am still writing new material, and it is getting better with each song. And when I do get on stage, it is glorious.

I was thinking of all this as I packed up my gear last night. Then someone came up to buy a cd from me, and my spirits lifted. I sat down to talk to a former boss and her husband (who was also one of my professors), and they told me I sounded great. I got to talk to my former band member for the first time in ages. The Hump Day host thanked and complemented me about five times. I talked to the mighty Mechanical Cat, who told me he's seen real growth in my performances...before going on to buy a shirt. As I was packing up my shirts and albums, Mechanical Cat told me I had the best merchandise suitcase ever. Then I discovered five bucks in my tip jar. By the time I was loading up my car, thinking about everything just made me laugh out of joy.

It's been an up and down year, but ultimately, I can't think of anything I'd rather be doing...because nothing makes me feel better. I've got big plans for next year (at least one album, more festival and other gigs, a new cover band so I can make money, a new version of The Antidepressants)...but there's plenty of time to let that all unwind.
Posted by themikedubose at 5:27 PM