A few years ago, I found myself playing a singer-songwriter showcase which was to be filmed for later television broadcast. We were also invited to do a Christmas song for an additional Christmas Special. Well, I couldn't think of anything I wanted to do, so I wrote my own holiday song: "X-Mas in the Drunk Tank."

I don't know if the Christmas special ever aired. I found out after the fact that the singer-songwriter episode aired. I never saw it, because I never actually heard about it until later. And none of these have ever turned up on YouTube or the show's website, so I just like to think of my television career as an unsubstantiated rumor.

But, as a result, I had a Christmas song. I liked the song, which made the fact I could only ever play the song one month out of the year just a little bit aggravating. But dealing with aggravation is just a fact of life for us non-famous musician types.

Last year, I had plans to record an album with a friend of mine. For whatever reason, we were very slow to get the record off the ground. I suggested we record "X-Mas in the Drunk Tank" as a way to jump-start the recording process...and shortly thereafter, I found myself with another original holiday song, this one entitled "I Don't Wanna Be Depressed (This X-mas)."

The album never actually happened. The Christmas single which was supposed to jump-start the recording process also never happened. But now I had the bug, and I really wanted to get all these recordings done. So I did what I've always done when dealing with frustrating circumstances: I've become self-sufficient.

So I'm deep into recording the album (and I actually should be done and ready to release in January). And somewhere in the process, I remembered the Christmas single idea. 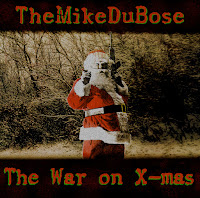 So, ladies and gentlemen, I present you the fruit of my labors. I call it The War on X-Mas. This contains both "I Don't Wanna Be Depressed (This X-mas)" and "X-Mas in the Drunk Tank." I'm responsible for every lick of it, every sound, every action. And it turned out better than I would've ever hoped.

I sincerely hope you check it out. I like these songs more than I should, and I think they sound amazing. It is now life at my Bandcamp page as a "pay what you want" download. Please do check it out. I will also have CD copies soon, which I will pair with a custom TheMikeDuBose Christmas ornament. More details on those when the physical CDs come in.

I'll be playing one or both of these songs this Wednesday at Stone's Throw for Hump Day Revue and this Saturday at Howard's Club H for the annual Toy Drive show (I go on at 9), Come see me and say hello,
Posted by themikedubose at 8:00 AM