While killing time in my office today, I glanced at one of my social networking sites and saw a very strange targeted ad. For whatever reason, their ad service seemed to think I would be interested in a sale on selected waistcoats.

Of course, my brain works in weird and mysterious ways, because in less than ten minutes, I had completely rethought my position on the previously uncontemplated garment. Some time in the last year, I have started to dress more formally. I'm more likely to be found in a button-up shirt than a weird tee shirt. I've largely replaced my jeans with khakis or green cargo pants. I even bought cowboy boots for some reason. 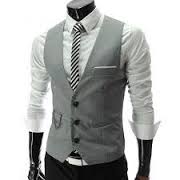 For the record, I really don't know why I started to dress up. Maybe it has something to do with losing some weight last year. Maybe it's some coming to terms with getting older. Maybe I just needed a change. I dunno...but in light of this, maybe a waistcoat wouldn't be such a bad idea.

I brought this up to my students. My first class was relatively unimpressed by the idea, with about half shaking their heads and about another half giving me an "eh, why not?" My second class, however, seemed to think it was a capital idea. A few of them expressed such approval of the idea, I seriously considered jumping online to buy a few right then and there. My wife, though, suggested us having a dinner then shopping date, so we could test out the effect of such a fashion shift in the real world.

What's the point of all this? I dunno. Maybe I'm just much more impressionable than I suspect. The other possibility is, however, a little bit frightening...because maybe the computer-determined advertisements actually know me better than I know myself.

I never thought when the science fictional universe finally came true, it would concern itself with my style of dress.
Posted by themikedubose at 9:39 PM

Bro go for it, waistcoats are in.