It's been entirely too long since I released my debut album Skeleton Coast. I really wanted to get a follow-up out fairly quickly. Life, though, has a way of intervening whenever possible. There was production issues. There was a year-long detour into a cover band in an attempt to actually make money playing music (spoiler: it didn't work). There were work crises. Some times, it seemed like everything possible which could delay my work did delay my work. 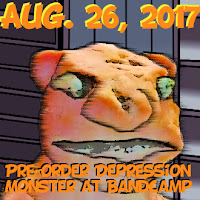 No worries, though. Depression Monster is on track. Recording is done. Mixing is done. Mastering is done. Test copy has been ordered, delivered, reviewed, and approved. The final order has been shipped. Files are on Bandcamp.

It's really hard for me to get perspective on my work anyway, and when I've been working on an album this long, it's nigh impossible. Nevertheless, it sounds very, very good to my ears. I've given it to a few people I really trust, and they tell me it's as close to "official major label release" in sound as one can get. Nick Zoidberg, my compatriot, is relatively gaga over the album. All these are good signs.

There will be much more coming about the album in the next few weeks. Today's news, though, is that the scheduled Saturday album release show has been cancelled due to accidental double booking. No worries, though, as I'll now be playing at Stone's Throw (my home base) the next three months: on September 9 (Black Swamp Arts Festival weekend!), October 7, and November 11. I'll also be hitting many other area establishments, so there will be many opportunities to see me and snag a disk. Can't get to a show yet still want the physical artifact? E-mail me at themikedubose@yahoo.com and I will work something out.

If you're the kind of person who does their music digitally, the album is available for pre-order on my Bandcamp page. If you order now, you get an immediate download of the opening track "Mileage." The full album goes live this Saturday, August 26.