I have a band!

Using methods beyond my own comprehension, I have assembled yet another backing band (The Antidepressants version 4.0, I think). I can now bring a full band rock show to my second album's songs. This makes me mighty happy. We played as a four piece on Black Swamp Arts Festival weekend. We did a three piece performance at a party adjacent to the Luckey Fall Festival. And this weekend, we get to do it again! 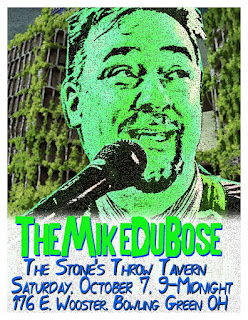 This Saturday, I'm playing at Stone's Throw (my home away from home). I will be splitting sets with the immensely talented April Freed. I go on for an acoustic set from 9:45 to 10:30. After April's second set, TheMikeDuBose and the Antidepressants bring the rock from 11:15-midnight. It will be a blast and a half, and I'd really love to see you there.

Tonight, though, I'm doing a warm-up at The Hump Day Revue, where I'll get about four or five songs on acoustic. Also, my horn player Nick Zoidberg will be joining me. I will have copies of both albums for sale, and I'd also love to see you tonight.

In the meantime, isn't this weekend's flyer very green?
Posted by themikedubose at 7:06 PM