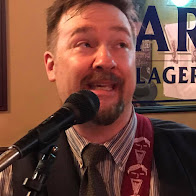 TheMikeDuBose is a singer/songwriter who specializes in original indie rock/pop. Lyrically, Mike focuses on the happier side of life, or, as his motto says, "songs about alcohol and depression." But funny! Timmy C of the Hump Day Revue says "there is plenty of passion, comedy, and sincerity in Mike's repertoire." His first two albums (Skeleton Coast and Depression Monster) are both available for purchase on Bandcamp. His new album, Happy-Go-Lucky, will be released June 23rd, 2022; it will be available for purchase on Bandcamp and streaming on all major outlets.

Mike regularly plays out in the Michigan/Ohio area, performing his selection of originals and cover songs ranging from Motown to Miley, with a particular emphasis on the 1980s. He has played most notably at the Old West End Festival (Toledo OH), the Tiffin Music & Art Fest (Tiffin OH), the Glass Swamp Music Fest (Toledo OH), and A Dam Good Time (Grand Rapids OH), as well as at a selection of fine music venues throughout the area.
His songs are for fans of Counting Crows, Foo Fighters, and Glorious Sons. Contact TheMikeDuBose at themikedubose@yahoo.com . 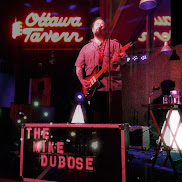 TheMikeDuBose is the pen/stage name of one Mike S. DuBose. Clever, huh? Mike is a singer-songwriter out of Northwest Ohio who writes songs about alcohol, depression, and other fun topics. He has two albums available for purchase on Bandcamp. His new album, Happy Go Lucky, will be released on June 23rd, 2022; it will be streaming pretty much everywhere. He's also on all the standard online social sites.
In addition to playing his own stuff, Mike is also an experienced musician. As a kid, he was classically trained on violin but gave it up because it was hard to play AC/DC on the thing. He has played very heavily distorted guitar in several very loud bands (see Other Endeavors for samples). He is also open to other noise-making possibilities.
But he is about more than just music! Mike is a father, a husband, a clinically depressed mentally ill guy, a pretty decent cook, an amateur photographer, a college teacher, a Doctor of Philosophy, a former Media Studies scholar (widely published but still a failure), a former pizza place co-manager, a nerd, a snappy dresser, a social outcast, a published (one time) poet, a vegetarian, and a science fiction fan. He was also on a radio show once. Despite this varied resume, Mike has never really hit the big time or achieved fame...or even infamy, for that matter.
Still, he has hope.

from the forthcoming album Happy Go Lucky:
from Depression Monster: